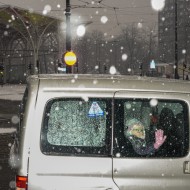 Alexander Gronsky was born in Tallinn, Estonia in 1980 and began working as a press photographer in 1998. He gradually moved from editorial photography to working on personal documentary projects focusing on the contemporary Russian landscape. He has received numerous awards, including the 2013 Prix Levallois-Epson, the 2012 Foam Paul Huf Award, the 2010 Silver Camera Grand Prix, Moscow, the 2009 Aperture Portfolio Prize, and the 2009 Linhof Young Photographer Award. His work has been presented in solo exhibitions in Tokyo, Moscow, Paris, New York, Amsterdam, Beijing, Bogota, and Levallois, France, as well as numerous group exhibitions. He was a participant in the 2003 World Press Photo Joop Swart Masterclass. Gronsky is based in Riga, Latvia

We hope that still image is a proof that time exists. We need to believe that history is real. That buildings bare witness to the generations of people streaming by. But they don’t. They are liquid themselves. Very much like snowflakes turning into water.