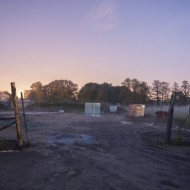 (born in 1969) is an architect by education. He creates photographs documenting the social, historical and political relationships between man and the landscape. He is particularly interested in real, tangible consequences of implementation of romantic ideas and dreams. He authored the album “Łódź – photographs from the beginning of the century”. He won the Polish Press Photo competition in 2002 and was nominated to ESPY Photo award in 2014. He participated in many individual and collective exhibitions, among others in Graz, Košice, Hamburg, Derby, Kaunas and Swansea. His photographs were published, among others, in the Sunday Times Magazine, the Guardian and Der Spiegel. He was one of the protagonists of the documentary on art in Lodz, made by Arte TV in 2013.

“In his wanderings to the town suburbs, Artur Urbański used the unique time of the day, at nightfall. This consistent gesture allows Urbański to break the convention of a documentary, a report on the state of affairs – and to create a visual parable. Specifics cease to predominate, what matters is the tale of dreams, of work and toil, but also of destruction, appropriation and loss. It makes the tale much more universal and unequivocal than it could seem. It speaks volumes about our attitude towards the world and towards nature, and ultimately about us. Many of the pictures evoke associations with the visual and rhetorical image of a “landscape after the battle”: disturbed soil, crooked fences which barely stand, disquieting celadon glow. And a battle of sorts is indeed under way in there: an incessant fight for a new and better life.