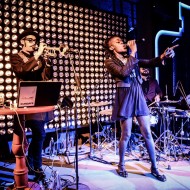 THE FIFTEENTH BIRTHDAY OF FOTOFESTIWAL

It is hard to believe, but the facts speak for themselves. The first edition of Fotofestiwal Łódź was held fifteen years ago. A lot has changed since then, but some things remained the same. It has always been the people who bound the festival activities together throughout the years. It all began with a group of enthusiasts who decided to take action, and who infected other people, who joined the team each year to create the ever larger event, with their positive energy. Artists, curators, reviewers, volunteers – it is impossible to enumerate all those directly involved in the organization, not to mention the thousands that visit Łódź during the celebration of photography.

Fotofestiwal involves not only pictures, but also, or perhaps most of all, people. Those whose stories are told by photographs and those who create, watch and experience them. It is also a meeting space. Let’s meet this year as well! At the grand opening, vernissages, discussions, workshops… and at the BIRTHDAY PARTY!

Join us at the Book Art Museum to celebrate the fifteen years of Fotofestiwal.