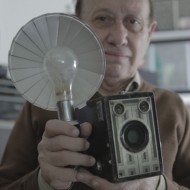 There is no tale of the cinema without the tale of photography. These two media have much more in common than Muybridge’s photographic experiments show. Pictures locked in the frames, even though they are not frozen in time, have always drawn from the works by the masters of camera. PGNiG Transatlantyk Festival and Fotofestiwal decided to recall this relationship in a dedicated movie programme.

The cooperation between Fotofestiwal and PGNiG Transatlantyk Festival will enable the viewers in Łódź to watch the most interesting photography-related documentaries made in 2015 and in 2016. The main part of the programme will consist in a retrospective of works by Trisha Ziff. The director is going to visit Łódź and participate in author meetings. Her film “The Mexican Suitcase” tells the story of one of photography’s most important discoveries – the finding of the suitcase containing photographs by Robert Capa, David Chim Seymour and Gerda Taro, which had been deemed lost for 50 years. The screening is directly related to one of the most important exhibitions of Fotofestiwal 2016, “Chim: David Seymour, Citizen of the World”, a monographic exposition of the most interesting photos by David Seymour, co-founder of the prestigious Magnum Photos agency.

Another film by Ziff, “The Man Who Saw Too Much”, was nominated for the most important Mexican film award, Ariel 2016, in the Best Feature Documentary award. It tells the story of a photojournalist of Mexican newspapers, Enrique Metidines, who may have inspired the protagonist of the movie “Nightcrawler” by Dan Gilroy – he took photographs during a heart attack and he travelled with ambulances, to arrive at the scene of the accident as the first. His photos were too brutal to be bought by American press. However, life added a new ending to last year’s cinematic hit: photographs of accidents started to appear in galleries worldwide and in private collections, and the photographer became an art world celebrity. The screening will be the Polish premiere of the film, and the works by Metidines will be displayed at the exhibition at OFF Piotrkowska, in the Hit the road.  Photographers’ travel section.

How much photography is there in film, and how much cinematic narrative in photographs? “Field Niggas” is a (photographic and film) project by Khalik Allah, documenting the life of Harlem “street people”. The sociological case study touches upon the racial segregation problem and at the same time, poses questions regarding the film form, as the photographs have been put into motion and the picture is a perverse analysis of the so-called “Bresson’s decisive moment”. The screening will be followed by a discussion with photography theoreticians and film experts.

The film programme elaborated together with the PGNiG Transatlantyk Festival will be closed by the Polish premiere of the film which captivated the audiences at Sundance Film Festival and Berlinale: “Mapplethorpe: Look at the Pictures”, the latest production by HBO presenting the life, work and controversies surrounding Robert Mapplethorpe – the author of shocking pictures, sold for record amounts at art auctions. At the same time, it is an intimate, honest and often ironic image of the life of one of the most interesting independent photographers of the American art world.

Owing to the cooperation between PGNiG Transatlantyk Festival and Fotofestival, the most significant photographic event in Poland will once again feature a film programme. The screenings will be accompanied by author meetings and discussions with photographers and with experts in film and photography.
PGNiG Transatlantyk Festival is a multidisciplinary event devoted to music, film art and film education, held in Łódź from 23 to 30 June.

16.06, 6:00 PM, “Field Niggas”, directed by Khalik Allah, USA 2015, 60’
the screening will be followed by a discussion: “Moving photography or film”, devoted to film and photographic form, with the invited guests: Błażej Filanowski, Krzysztof Miękus, Kamil Jędrasiak.