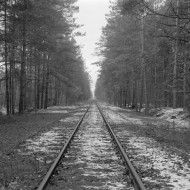 As my train journeyed from Warsaw to Lodz in 2014 I drifted away into creative dreamland. This landscape that passed me by outside my carriage window was new to me so was fascinating. This railway had features that were so different from the railways in the UK from the ladies in charge of the level crossings, the sidings and parked locomotives to the rail tracks going away into the forests. I had never seen rail tracks making there way through the trees quite like this before, it was if someone had said “Put it through there!” and just built it without any thought apart from connecting A to B. I fell in love with this railway aesthetic, which in turn through spending time led me to fall in love with Poland and its people.

My work at times had recently been inspired through accepting my own mortality, especially after reaching sixty years old. I saw these railway tracks being a pathway to Heaven my “Heaven Street”; I decided this would be the project working title. I would stand between the rails and photograph them at head height going away into the distance, travelling to infinity. A road to heaven. Little did I realise at the time the later significance of this title

Returning to London I was determined to return and photograph the railway lines that thread themselves through the forests of Poland. A pure landscape project with no hidden meaning until I met a close friend of mine Anne Braybon who pointed out to me “Oh the railway lines that ferried the prisoners to the Death Camps”. This had never occurred to me, I was excited, now I really had a worthwhile and powerful project.

Using Google Maps and Streetview I explored all the railway lines in Eastern Poland, especially those that would lead to the camps. I then spent the majority of the 2015 Polish winter driving to the locations and walking what seems like tens of kilometres mostly alone up isolated railway tracks.

I was shocked when visiting Treblinka and in the museum peering down into a model of the camp. Adam Kozlowski who understood German, who was my companion, looked at me and pointed to the sign “Himmelstrasse” above the model pathway leading to the gas chambers. He informed me that when translated into English means “Heaven Street“.