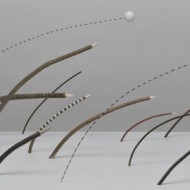 A graduate from the Academy of Fine Arts named after Władysław Strzemiński in Łódź. A diploma from the Faculty of Graphics in 1974. Since1976 an academic staff member at the Academy of Fine Arts in Łódź and PWSFTViT in Łódź. Also an author of texts about photography. A teacher of many graduates who have been actively participating in art. Artistic works in photography, electronic media, exhibit, installation, drawing, graphics, sculpture and other arts involved. He participated in many exhibitions in Poland and abroad.

Before Adam and Eve were created, there was a creature similar to man who could fly. It was made of such light matter that it could fly using its willpower. Perhaps this is where the legend about Elves came from. They say that when God modelled man some intrigued creatures interfered seriously. He caught them all (almost) and when giving life to Adam He confined them in his soul. Therefore, man has such an uncontrolled inclination for flying although man’s body of ground – clay does not allow to lift off.

I have planned to construct a mechanism for flying for a long time. I have tested various solutions but a drive made of the witch’s broom proved best. I gave a No-Flight name to this equipment. It appeared that it has become something more than a structure. No-Flight became ethereal, delicate, light, misty, cobwebby, volatile and airy. When I look up at the sky, stars through it – I can feel my littleness, nothingness, disability. Or perhaps my bigness, loftiness and inclination towards the unification with greatness of the world?

I dedicate it to Franz Reichelt