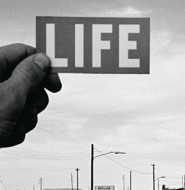 Have Book Will Travel

Have Book Will Travel is a selection of photobooks, referring to the title of the song recorded by The Sonics in the 60s. The departure point for the selection is the cult book, The Americans by Robert Frank. It is important for the contemporary history of photography not only due to the controversial and taboo-breaking image of the contemporary United States it presented, it is also a significant work which laid the foundations for the romantic myth of the photographic journey through that country, the myth to which artists still refer when they use photography and books as two complementary media to create a rich narrative describing the travel experience. They comprise both the romantic concepts of unrestricted freedom to move, which originated in the beatnik circles close to Frank, and the fixed imagery which fits into the conventional image of America. The United States are pictured as a roadside bar, a motel highlighted by a neon sign, a gas station in the middle of nowhere or a highway stretching to the horizon. Te books presented in the selection draw from this myth: by forming its part, as A Roadtrip Journal by Stephen Shore, who glorified the ordinary by photographing every detail of his journey, such as parking tickets or leftovers from a roadside bar; by exploring it as Gasoline by David Campany, who presented the evolution of American motoring on the basis of archival photographs or by toying with it, as The Great Unreal by Taio Onorato and Nico Krebs, who transformed the American landscape into a test bed for their imagination. The selection comprises books by photographers who have travelled the American roads – as Jacek Fota, who described his experiences in the small and extremely intimate Some Things are Quieter than Others, but also by those, whose travels had a symbolic or metaphoric nature, such as Radius 500 Meters by Terje Abusdal, telling the story of a local reported and gas station owner, documenting the meetings of newcomers with the local community of a small Norwegian town or Two Thousand Light Miles From Home by Pietro Mattioli , who only travelled the distance from home covered by the range of the baby monitor fitted in his child’s bed. As in the song Have Love Will Travel by The Sonics, in which love cares not for distance, the books presented exceed the boundaries of the set conventions of recounting a journey and take us closer to places which we had no opportunity to experience personally.

Fotofestiwal 2016 > Have Book Will Travel
Coding by: Osten