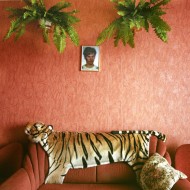 FOTOFESTIWAL International Festival of Photography in Lodz, Poland presents Karolina Jonderko Lost as part of the 20th Noorderlicht Photofestival and the exhibition ‘20|20, A world of photography’.

FOTOFESTIWAL International Festival of Photography in Lodz, Poland was invited to be a part of the 20th edition of Noorderlicht Photofestival. Lodz Fotofestiwal has nominated one young Polish photographer for the exhibition ‘20/20 – a World of Photography’. The aim of the exhibition is presenting the work of one photographer who is still unknown outside his or her own country, who exemplifies photographic developments in that region. Karolina Jonderko with her project ‘Lost’ will present her works at this prestigious event, between 1st of September and 13th of October 2013 in The Old Sugar Factory in Groningen, the Netherlands.

Lost
Every year the police file 15,000 missing person reports. Every day these absent faces look out from posters designed to attract our attention. ‘Lost’ is a long term project about missing people in Poland. Karolina Jonderko travelled 7,200 km around the country to the visit families of missing people, to photograph their rooms and to collect their portraits. The rooms of the missing are very often left untouched, for several months, years, and even decades. These intimate portraits of frozen lives, time standing still, reflect a memory. Somebody lived in these places; somebody was there, sitting at the table, sleeping on the sofa, living. The sixteen portraits are differentiated by the sharpness of focus. It is the author’s interpretation of remembrance and time. Often it is not possible to recall information, or associations, which is testament to the slow, but inevitable process of forgetting.

Karolina Jonderko
Was born in 1985 in a small town in Silesia Region in Poland. She is a student of photography at the Polish National Film, Television and Theatre School in Lodz, Poland. She has taken photos since she was 18. Most of her works are based on experience and childhood memories. Karolina has been chosen for the prestigious mentor program of Napo Images (www.napoimages.com) – one of the most important Polish agencies. The program has been designed to support young talented photographers in their long time documentary projects, promotion and further professional activity.

‘20|20, A world of photography’
To celebrate the twentieth edition, Noorderlicht asked twenty institutions from all around the world to make a presentation for themselves in the exhibition ‘20|20, A world of photography’. Those selected are all institutions to which Noorderlicht feels akin, because they, like Noorderlicht, make their own exhibitions and work in a narrative manner. Each institution is presenting the work of one photographer who is still unknown outside his or her own country, who exemplifies photographic developments in that region. The title refers not only to the 20th anniversary, but also to ‘20|20 vision’, the sharp gaze on the world that Noorderlicht and the other twenty institutions strive for.

Noorderlicht
Is an internationally oriented institute for photography that provides a podium for talented photographers from all corners of the earth. That was demonstrated in the much-praised festivals focusing on photography from the Arab world and Africa, among other events.