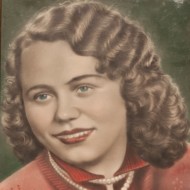 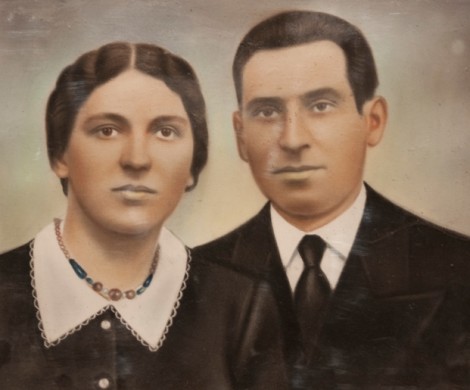 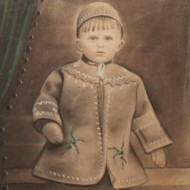 Embellished, colourized, modified with hand-drawn images, plastic arts techniques and darkroom tricks. Mixed techniques, in many cases developed or enhanced by the authors. A great number of these works were created anonymously. The portraits appear photographically realistic, but at the same time plastically unreal and idealized. Any incidental background and clothing has been removed, faces and postures are improved, sometimes enriched with not-so-natural colours. These people have got older, changed, died, but their fair countenances have been retained in their houses, among similar holy pictures, religious symbols and meaningful mementos. These portraits formed a significant part of iconosphere in every house.

“Monidlo”, “mamidlo”, “photo-portrait” – these are only some names coined for this specific type of portraits. The climax of their popularity dates back to 1960s, but their history extends as far back as the 2nd half of the 20th century to late 1980s. While not limited to this one country, the trend seems to have matured into its exceptional features and a great vogue in Poland. Our estimates show that at least a several dozen, if not several million of individual monidlo photographs were taken only in Poland over a period of 100 years.

They witness to a style which is definitely a thing of the past. Not infrequently they were destroyed, thrown away or sold on flea markets and second-hand sales as unwanted keepsakes, tokens of kitsch and provincialism. The exhibited photographs are the result of several years of recovering such relinquished portraits.

Andrzej Różycki – an artist, film director and exhibition curator. He belonged to avant-garde groups which played a crucial role in the Polish modern art: Grupa Zero-61 [Zero-61 Group] and Warsztat Formy Filmowej [Cinematic Form Workshop]. For nearly thirty years now, he has worked with naive, folk and sacred art, collected it and used as a reference point in his artistic realizations. He describes his creations as sacred art.

Fotofestiwal 2013 > Exhibitions > I ARTIST. Everyone is an artist > Archives and Amateurs > A Perfect Portrait
Coding by: Osten