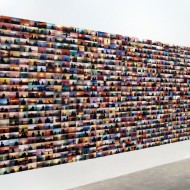 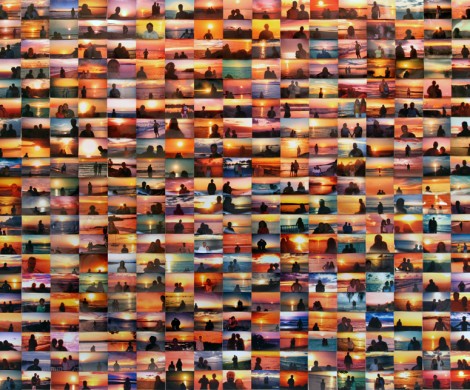 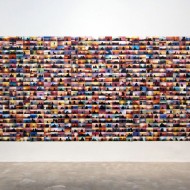 Sunset Portraits is a continuation of the Suns from Flickr project, which started in 2006 when searching “sunset” on the website Flickr returned more results than anything else I searched. I thought it peculiar that the sun, constant giver of life and warmth, symbol of enlightenment, spirituality, eternity, and all things unreachable, omnipotent provider of optimism and vitamin D… and so ubiquitously photographed, is now subsumed to the internet, the most virtual of spaces, equally infinite but within a closed cold electrical circuit.

In Sunset Portraits the technology of the point and shoot camera reads and exposes for the sun not the subject. I was thinking of the relationship between the individual assertion of “being here” in the photograph, the lack of individuality ultimately experienced when faced with so many assertions that are more or less the same, and the power of the collective ritual we all participate in.

The title of each installation changes to reflect the number of images tagged “sunset” on Flickr at the time I produce the prints for installation. For example: Sunset Portraits from 9,673,302 Sunset Pictures on Flickr on 8/31/11.

Penelope Umbrico’s photo-based installations, video, and digital media works explore the ever-increasing production and consumption of images on the Internet. Navigating between consumer and producer, materiality and immateriality, and individual vs. collective expression, she views all images within this emergent environment as evidence for something other than what they depict. Umbrico has exhibited widely, both nationally and internationally and has participated in exhibitions including those at MoMA PS1, NY; Museum of Modern Art, NY etc. She has held numerous visiting artist and teaching positions, among them RISD, Parsons, Harvard, Cooper Union. She was Chair of MFA Photography at Bard College from 2004-2010, and is currently core faculty at the School of Visual Arts.

Fotofestiwal 2013 > Exhibitions > I ARTIST. Everyone is an artist > Transcendent Amateur > Penelope Umbrico
Coding by: Osten