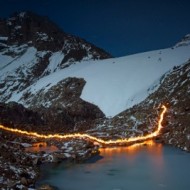 Mount Kenya is the eroded stump of a long-dead, mega-volcano. Photographically, I hope to re-awaken its angry, magma heart. The mountain has an especially fierce demeanour, the peaks are childishly sheer and ragged, and since I first saw them I’ve been thinking of Gormenghast and Tolkien.

The fire lines I have drawn indicate where the front of the rapidly disappearing Lewis Glacier was at various times in the recent past. Photographing time’s thickness, trying to expose it’s ‘layeredness’, is something I’ve been attempting in different settings and through different channels for the last dozen years. The ‘Fire vs. Ice’ metaphor I employ is especially piquant for me. My pictures contain no evidence that this glacier’s retreat is due to man-made warming (glaciers can retreat when they don’t get sufficient snow, or if the cloud cover thins, for example,) but it is nonetheless my belief that humans burning hydrocarbons are substantially to blame. To think that in ten or twelve years this magnificent glacier that has endured for millennia will exist only in photographs, is unbearable. The feeling I have for the loosing of the Lewis can only be called ‘grief’.

Simon Norfolk (United Kingdom) is a landscape photographer whose work over fifteen years has been themed around a probing and stretching of the meaning of the word ‘battlefield’ in all its forms. As such, he has photographed in some of the world’s worst war-zones and refugee crises, but is equally at home photographing supercomputers used to design military systems or test-launches of nuclear missiles. His work has been widely recognised: he has won The Discovery Prize at Les Rencontres d’Arles in 2005; The Infinity Prize from The International Center of Photography in 2004;  and he was winner of the European Publishing Award, 2002. In 2003 he was shortlisted for the Citibank Prize now known as the Deutsche Böurse Prize and in 2013 he won the Prix Pictet Commission. He has produced four monographs of his work including ‘Afghanistan: chronotopia’ (2002); ‘For Most Of It I Have No Words’ (1998) about the landscapes of genocide; and ‘Bleed’ (2005) about the war in Bosnia. The most recent is ‘Burke+Norfolk; Photographs from the War in Afghanistan’ (2011).

W.M. Hunt (United States) has been collecting, looking at and talking about photography for over 40 years.  He is an author (“The Unseen Eye: Photographs from the Unconscious”, Thames & Hudson) and “Hunt’s Three Ring Circus” (Dancing Bear Press), dealer (Hasted Hunt, Ricco/Maresca), and teacher (School of Visual Arts, Aperture and ICP).

Highlights from his collections have been exhibited at the Rencontres in Arles, Musee de l’Elysee in Lausanne, FOAM in Amsterdam, The George Eastman House in Rochester, NY and Foto Industria in Bologna. He continues to write and lecture, review portfolios, judge competitions, and serve on the boards of the W. Eugene Smith Memorial Fund and The Center for Photography at Woodstock.

W.M. Hunt’s talk How I Look at Photographs is, as the title suggests, about looking at photographs given by someone who has been doing that for many, many years.  When is a photograph great?  Mr. Hunt looks back at a life in photographs and tries to sort it out and share his insights with the audience.  The talk is meant to be little rude, a little unexpected and funny, but thoughtful and provocative, with a lot of photographs.