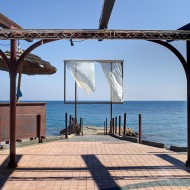 Between 29th May and 13th September 2015 in Atlas Sztuki there will be presented the Carl De Keyzer’s project ‘Moments Before the Flood’ carried out in 2012. In Atlas Sztuki we will show over 30 selected large format photos from this project.

Carl De Keyzer started his career in 1982 as a freelancer, he was also a professor at The Royal Academy of Fine Arts in Ghent and a coauthor of the ‘XYZ’ gallery of photography at that time. Since 1994, he has been a member of ‘Magnum’ Photo Agency. His projects are not composed of single, separate photos, he prefers collecting pictures which are compatible with text (often fragments of his personal travel diaries) instead. He is the author of the photographic series  published in the following albums: India (1987), Homo Sovieticus (1989), God, Inc. (1992), East of Eden (1996), EVROPA (2000), ZONA (2003), Trinity (2007), Congo (Belge) (2010) and Moments Before the Flood (2012).

In the ‘Moments Before the Flood’ project, traveling along several thousand kilometers long European coastline, De Keyzer examines how Europe copes with hard to predict threat that is rising the sea level. Due to the climate change this phenomenon may have dramatic impact on the Old Continent. The photographer not only focuses on the possible future consequences of this situation, but also studies different forms of protection of the coastline over the centuries and investigates how Europe copes with flows and floods today. According to him, the protection over past few years was provided aimlessly (huge investments in materials and work constituted a big part of that) because “the enemy” had not appeared or even if it had appeared, the constructions turned out to be obsolete. Is Europe ready for the possible dramatic sea level rise? This photographic project, called ‘research program’ by De Keyzer, shows, first of all, the tension resulting from the unawareness of how real is the threat and how insufficient is our protection.