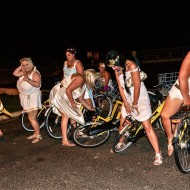 The exhibition „Wild Life” features two Dougie Wallace’s stories: ‘Shoreditch Wild Life‘ and ‘Stags, Hens and Bunnies A Balckpool Stories‘. The first one is an autobiographic story about the street life in Shoredich – the district in London, the author has lived there for 15 years. The second book tells the story of a town on the west coast of England, famous around the country for the parties and stag nights organised there. What both stories have in common is their directness, absurd and redrawing which have the specific sense of humour behind. The Wallace’s works, depicting the grotesque side of the human nature and moments when people go beyond any limits, seem to be the fascinating social documentary. Those are also the stories about the spirit of the places full of colours and contrasts.