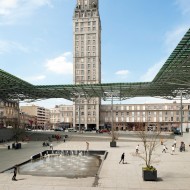 Photographs After Baldus is a multi-disciplinary international research project that investigates the relationships between history, memory, memorialization and photography in the built landscapes of Picardy. The inspiration and starting point for this project is the 1855 photographic album Chemin de Fer du Nord by Eduard-Denis Baldus. Developed collaboratively by Cary Markerink and Theo Baart and American writer, historian and curator Alison Nordström, the project will lead to an exhibition and publication in 2015.

Cary Markerink (the Netherlands) has been photographing since the 1970s. A champion of the documentary style, he is recognized for his projects Stadsstillevens (City-stills) and Post-war Housing in the Netherlands. He was awarded the Amsterdam City Maria Austria Prize for his landscape photography and in 2009 produced Memory Traces, a photo-book dealing with notions of landscape, culture, history and memory.

Theo Baart (the Netherlands) is an internationally recognized photographer, best known for his photobooks Territorium, Eiland 7, Bouwlust and Snelweg. His work is held in major museum collections in The Netherlands, United States and Japan. “Questions of development reflect our culture in a way that is so visual that it can force itself upon a photographer. The permanent friction in Dutch culture between the urge to control the process of change and the usually rather uncompromising or surprising practice has become my point of reference. I try to make my photo work enter into dialogue with other disciplines, such as environmental planning”.

Christina Capetillo (Denmark) born in Buenos Aires, Argentina, lives and works in Copenhagen as an Associate Professor at the Institute for Architecture, Urbanism and Landscape, School of Architecture at Royal Danish Academy of Fine Arts. She is a photographer and photographic theorist with a specialized interest in the vernacular built landscape.