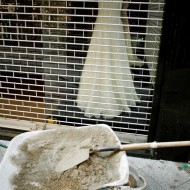 Reflecting a lifetime of both prolific photography and continuous travel, Wanderings shows what happens when a photographic eye is turned on unfamiliar places. Rauschenberg will discuss the process by which a journey with a camera becomes a body of work, illustrated by the example of this seven week wandering that yielded a series of photographs which melds together images from 15 cities and towns in Texas, Mexico, Portugal, Spain and Morocco.

Christopher Rauschenberg (United States) was born in New York in 1951 and has practiced photographic art since 1957. He has a B.A. in photography from The Evergreen State College in Olympia, Washington and taught photography and art from 1982 to 1996. He has photographed in 31 countries on 5 continents. He has had 113 solo shows and numerous group shows.  Available monographs of his work include four books, eight print-on-demand books and a deck of cards. He is a co-founder of Portland’s Blue Sky Gallery, where he has co-curated and co-produced 794 solo exhibitions by 675 artists and 50 group shows, and a co-founder member of the Portland co-op Nine Gallery. In 1995, he founded the Portland Grid Project, a 20 year, 50,000 image look at every square mile of the city of Portland, Oregon by 34 photographers. He is also the president of the Robert Rauschenberg Foundation. He was the 2003 Bonnie Bronson Fellow and his work is in the collections of 11 major museums.