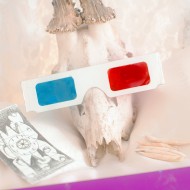 The rules of Bobolingo Games:

1. Two players take part in the game
2. Each player prepares 12 objects (bobols) they feel attached to
3. Players also bring their alter egos into play, these make the 13th bobol
4. Players pick bobols which they use to create pictures with; they roll a dice – the number of dots equals the number of pairs of elements, e.g. when a player rolls 2 dots, it means that they have to use 2 of the opponent’s objects and 2 objects of theirs
5. After the drawing of the number of pairs, players move to picking the objects marked with the numbers (from 1 to 13) from both their and their opponents parts
6. A player is bound to create a picture (with the bobols picked) which will satisfy them when it comes to the form and content. They can use any technique
7. Each participant has to create 12 pictures
8. A game finishes with a draw
9. The aim of the game is good fun

Robert Mainka, the fourth year photography student at Film School in Łódź. He is a total fidget craving for the constant change. He is interested in broadening his imagination limits by multimedia actions (photography, painting, making videos, drawing, writing) so as to prepare his imagination as well as himself to making feature films.

Magdalena Franczuk, the fourth year photography student at Film School in Łodz. She is collecting old objects and bibliophile books copies. This is the traces of the past that inbreathe her the most. Her photographic style is painting, film, theatre and literature – inspired.