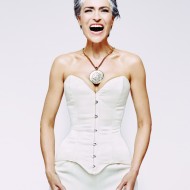 50 extraordinary photography portraits of “Twój STYL” selected from thousands of photos published in the magazine. In the pictures we can see well-known Polish personalities interviewed by “Twój STYL” like great actors, big names of Polish culture, media and sport. The exhibition focuses on the photography genre which became the trademark of the magazine that is the stylized portrait. Its scenario is written before a photographer and a celebrity meet in the studio. The stylization is the basic feature of the portrait. The majority of them is the result of team work. In contrast to a reporter who works on his or her own, a photographer of “Twój STYL” cooperates with an artistic director, a stylist, a hairdresser, a make-up artist and sometimes with a scene designer and a person responsible for characterization. The brainstorming precedes the session: somebody comes up with the idea of localization helping to emphasize the character of a photographed person; someone else finds a fancy prop or completes the stylization with a refined item of clothing. The final effect of those actions is visible in the artistic frames which are the great mix of interesting approaches to associations, photographic conventions and either painting or film inspirations.

The authors of the photos are the representatives of the young and the middle generation who many times debuted and spread their wings in the magazine.  Along with Twój STYL’s evolution, their ‘photographic language’ has changed and their concepts have shaped the magazine’s visual image. It is never accidental to choose a photographer because he or she is to decide if the photos will be solemn like those by Magda Wunsche and Agnieszka Samsel presenting Elżbieta Penderecka or if they will be more playful like Radek Polak’s frames.

However, nothing would be possible if it wasn’t for the involvement and openness of the photographed people who accept the adventurous conceptions and stylizations and sometimes even come with their own ideas. The authors of the photos admit that working with great artists may be unpredictable at times. Some people are able to leave the session in anger while others may shock the whole team. Szymon Majewski let the crew go get a coffee and took the pictures himself; Tomasz Lis fell asleep during the set; and Katarzyna Kozyra unexpectedly took all her clothes off. It happens that the shot in unique only because of the chemistry between a model and a photographer or thanks to one moment of uncontrolled spontaneity or reflection,   as in the Ania Przybylska’s portrait by Marlena Bielińska taken in 2012, which after the actress’ death got the new meaning and became to be very emphatic.

Presented photos are the editorial team’s favorite ones. There is not only the authors’ imagination depicted there, but also the charisma and charm of a model. Even though the photographic trends have changed, those portraits have not got old. They are timeless just like the personalities presented there. This unique collection is going to be exhibited for the first time.