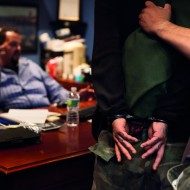 The photographer Clara Vannucci weaves together stories of defendants, bondsmen and bounty hunters in today’s New York, offering a visual narrative of an unexplored zone in the United States’ legal system, where crime and security clash and merge.

In the American legal system, an individual accused of a felony is called a defendant, who while waiting to be tried can go on living as a free man, as long as he pays a sum of money as a guarantee that he will appear before the court. If the defendant is unable to pay, bondsmen, or guarantors, take responsibility for the bail. It is up to them to persuade the more recalcitrant defendants to appear in court, even with the help of bounty hunters.

Bail Bond is a journey into contemporary New York—remote, murky and dangerous. A New York that is light years away from the city we have grown accustomed to, and thus more fascinating and real. A selection of images from Bail Bond was  exhibited at Addis Photo Fest, fotofestival in Addis Abeba, Ethiopia, as well as at several venues in Italy (Le Murate, Florence, December 2014; Officine Fotografiche, Rome, January 2015;  the jail complex Opera, Milan, March-April 2015).