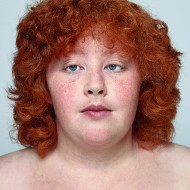 The Beautiful Gene is an editorial project focusing on the possible effects of artificial insemination on human kind: the extinction of red haired people.

In September 2011 the world’s biggest sperm bank stopped accepting red haired donors for a period: demand for them was too low compared to the supply. After being scorned, persecuted and marginalized for centuries, could redheads now begin to be eliminated in a conspiracy of online questionnaires, aseptic clinics and frozen sperm?

Acting as a conservation geneticist, Marina Rosso classified the genetic variation of a species, in the first step to preserve its diversity and components. Rosso started by creating a matrix that would represent the red hair gene through 48 categories, each uniquely combining this feature with five more physical traits (gender, height, build, eye color and hair type). Then she set out on a journey looking for real people who could literally embody these categories. Marina took 204 portraits and later selected 47 of them. One category is still missing.