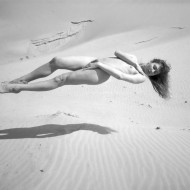 The events of the 90’s in Latvia, revival of the country and euphoria in Latvian society fulfilled me with new urges – romance, admiration, love. In 1987 I met a very creative and capable actress Tanya Olhovskaya. As a model, she expressed herself physically and emotionally through the fantastic vision of „The Flight”. We developed and perfected our idea. Then we found the technical solution. The ongoings of the contemporary society mixed together with my personal feelings. I complemented my visual expressions with verses –

The idea that we had developed begged for a meaningful use. It was the time of market economy philosophy. I recalled The Hanseatic League and had an idea, that „The Flight” could take place in the port markets of former Hanseatic cities. There were eleven such cities in Latvia. Although my concept was not understood and seemed too romantic, the idea formed shape and soon there was a collection of 50 works. The exhibition was received with great interest. I was slightly unhappy with the huge curiosity towards the technical solution. It felt like my verses –

were put aside.
But how could I feel disappointed? The process of creation was fantastic and when the project came to fruition we were overwhelmed. It was the creation of our everlasting love.

In the first half of 60’s Gunārs Binde quickly gained recognition in the USSR and internationally for his „Psychological Portrait” (1962), the series of staged photographs „The Wall” (1964), the dramatic and expressive „Portrait (Eduards Smiļģis)” (1965) and several nudes. In the course of artistic collaboration with artist and scenographer Arnolds Plaudis he developed an original method of staged photography, for which there are no direct analogies in world photographic art of the 60’s. The photographer’s ideas are realised through a syntesis of theatrical and acting elements, along with aesthetic principles borrowed from film, so that we may draw distant parallels with well – known movements in the world at that time, such as Italian Neorealism and the French New Wave. A significant concept in the art of Gunārs Binde is that of the „artistic image in photography” : distinguished from the simple recording of facts, it expresses a philosophical meaning intended by the photographer.

The International Federation of Photographic Art (FIAP) has awarded Gunārs Binde the distinctions AFIAP (Artiste FIAP, 1975) and EFIAP (Exellence FIAP, 1988). Aside from that he is an honourable member of photographic organisations in Finland, Hungary, Germany, Austria and Poland. He has had many solo and group exhibitions in Japan, the USA, Slovakia, Austria, France, Czech Republic, Poland and all around the world. He has been awarded the Order of the Three Stars which is the highest award for meritorious service to Latvia. He has received numerous awards for his works, like „Grand Prix” in Buenos Aires, Argentina in 1965 for his „Portrait (Eduards Smiļģis)” and his works are a part of many private collections, such as Michel Auer’s . He is today one of the three most important Latvian photographers and is often called „the legend of Latvian photography”. He resides in Riga, Latvia and is happily married to his wife and muse (model of „The Flight”, „9 months”, and other photo series) Tanya.