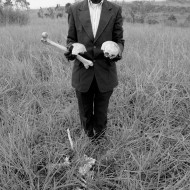 Krzysztof is mostly interested in extreme emotions both expressed and felt by people. His concentration focused on a human-being, converges his photography to a mission of exploring humanity. According to him, he occupies himself with the uncompromising report sociology. The harsh conditions Miller focuses on, depict the tragic and scary side of the world. Having experienced a lot of life-threatening situations not only as a photojournalist but also as a human, he did lose his neither sensitivity nor boyish curiosity of the world. He seems to be only an observer and with his camera tries to back the weaker and the poorer.

Krzysztof Miller was born in 1962 in Warsaw. He is a Polish photographer and photojournalist occupying himself with sociological and creation photography as well. He started his photo carrier working for the opposition magazines in Poland. As an example, he took photos during the Round Table Talks in 1989. Since 1989, he has been a photojournalist of ‘Gazeta Wyborcza”. In his book “13 wars and one. The true story of a war reporter” he shares his experiences, observations and stories from the war reporter’s life on several battlefields. What is more, he describes there his personal struggle with so called ‘Combat Stress Reaction’.