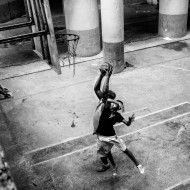 The works of the last edition winners will be presented this year at the Leica Oskar Barnack Award exhibition. You can see Martin Kollar and Alejandro Cegarra’s projects in the Fotofestiwal Center in Fabryka Sztuki gallery in Łódź during the festival – from the 28th May to the 7th June. Leica Gallery Warsaw organizes the exhibition.

Martin Kollar, born in Czechoslovakia (now Slovak Republic), received this prestigious award for his project “Field Trip” made in Israel. The Newcomer Award 2014 was given to Alejandro Cegarra from Venezuela. His portfolio “The Other Side of the Tower od David” tells the story of dwellers of a one skyscraper in Caracas.

“Field Trip” photos were taken as a part of “The Places” project, which documents Israel and the West Bank where Martin Kollar has been working together with other 12 well-known photographers from different countries. The aim of the project was to present the diversity and multidimensionality of this region. His stay in Israel brought Kollar back his childhood memories from communistic Czechoslovakia. In Israel, searching and arresting citizens are on everyday basis .  People feel permanent fear of being spied. Kollar managed to catch in his pictures both everyday life scenes and absurd or humorous situations. His portfolio is very diverse when it comes to the visual side. It covers many subjects starting from the presence of army on the West Bank to wilderness and people’s portraits. Those scenes are banal, ridiculous or comic but also tragic at times. Kollar documents strange things which became reality, in this way he illustrates the trauma of people living there. Seemingly these photos can be presented separately however the suspense is the thing that connects them. It seems like the army is everywhere. It is hard to tell where the military zones end and normal civil life begins.

Martin Kollar was born in 1971 in Žilina (Slovakia). He studied at the Academy of Performing Arts in Bratislava. After the studies he worked as a photographer and camera operator. His works have been exhibited around the world, e.g. in Maison Européenne de la Photographie in Paris, Museum of Modern Art in Shanghai and during the Month of Photography in Cracow. He has received several awards e.g. Fuji Film Euro Press Photo Award and a honorary distinction of Leica Oskar Barnack Award.

Alejandro Cegarra is a young photographer from Venezuela, his project “The Other Side of the Tower od David” tells the story of illegal dwellers in Caracas. A building of Centro Financiero Confinanzas was supposed to be the headquarters of one of the most important bank in the world, and office and hotels complex. Today the abandoned structure is known as “Torre de David” (David’s Tower); 2000-2500 illegal tenants live there. Investor David Brillembourg started building it in 1990. This is his name the tower took its name from. Unfinished skyscraper has 45 floors and is 192 meters high. It stopped to be built because of its author’s death and the economic crisis. The first immigrants from the slum moved in in October 2007. More and more people started to settle down there. With the makeshift materials they changed those empty spaces into their apartments. It is not easy for the strangers to get inside and see what happens there today. It is said to be a criminal paradise. Cegarra was surprised how well welcomed he was there, they let him enter their private lives. The photographer presents a different vision of the dwellers seeking the normal life and the social acceptance. Black-and-white photographs show their need of belonging and finding their own shelter. The need that Venezuela has not satisfied so far.

For them the tower is not only a shelter and a home, it is also a symbol of their revolution against corruption of the local establishment.

The building of Centro Financiero Confinanzas was supposed to be a symbol of economic metropolis of global importance and a city guideline. Now it is only the sign of the state’s negligence.

Alejandro Cegarra (born in 1989) after his photography and marketing studies worked in the advertising sector. Then he started working as a photographer for Ultimas Noticias – the biggest daily newspaper in Venezuela. Today he works for “Associated Press” in Caracas

Martin Kollar, the winner of the main prize in Leica Oscar Barnack Award, received 10 000 euro, camera M and camera lens (worth 10 000 euro) Alejandro Cegarra as the winner of the “Newcomer” category was given 5 000 euro and a Leica M camera with the camera lens. The award ceremony took place on 9 July 2014 during the Photo Festival “Rencontres d’Arles” w Arles (southern France). Additionally, for the first time the Audience Award has been announced. The winner, Tadas Cerniauskas (“Comfort Zone”) was chosen out of 50 authors of the best works in the main category and of 20 best ones in the “Newcomer” category via free voting on www.i-shot-it.com platform – the leading site with the photography contests.