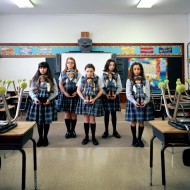 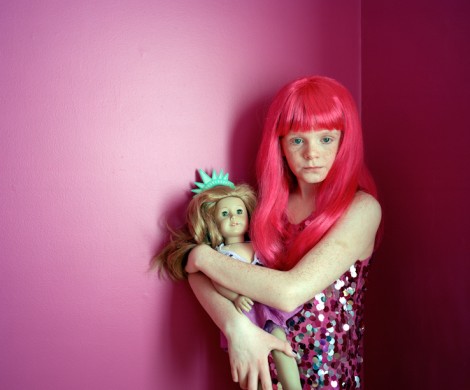 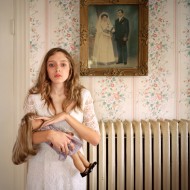 American Girls is a series of portraits of girls in United States who own American Girl dolls. When I first came to US the phenomenon of the American Girl doll immediately caught my attention. Photographically it was a beautiful image – girls with their sculptural representations, their twins, their avatars. I realized that their design embodies contemporary cultural values. They were conceived to be anti-Barbie toys modeled after a body of a nine year old.

Each doll can be customized to look exactly like its owner, yet all of them really look the same. American Girl dolls offer an illusion of choice therefore an illusion of individuality. Despite they play a crucial role for girls in a moment when they are forming their identity. With a wide variety of miniature accessories, a doll hospital, a doll hair salon with personal stylists they are perhaps the most luxurious toys ever invented.

American Girl product defines and categorizes American girls – future American women and that fact raises important questions about who gets represented and how.

Ilona Szwarc (1984) was born and raised in Warsaw, Poland. In 2008, she immigrated to New York City, where she currently lives and works. Her work examines gender, identity and beauty in the context of American culture. Prior to moving to US Ilona was working in film industry. Her credits include working with directors: Roman Polanski and Andrzej Wajda. Ilona has worked for photographers Mary Ellen Mark and Joel Meyerowitz. Her work has been featured in numerous publications worldwide including TIME, The New Yorker, The Sunday Times Magazine, The Telegraph Magazine, Surface China, PDN. She has won World Press Photo 2013 in the Observed Portraits category.