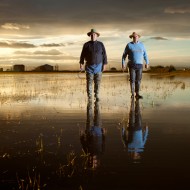 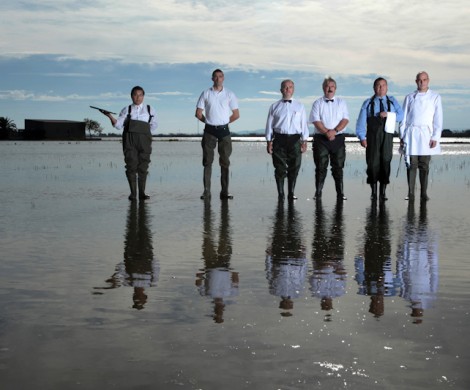 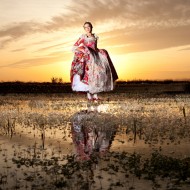 “Species”, is a sociological study where reality and fantasy get mixed. These images are the pages of a “Catalogue of Species from the Albufera Natural park”. Not animal or vegetal species, but human ones. The Albufera Natural Park, in Valencia (Spain) is formed by an extension of 21.000 hectares of sweet water and rice fields. The landscape offers a spectacle of changing light and endless plains.

I portrayed what I consider to be every representative group of that land. They all have something in common: they are inhabitants of this microclimate formed by water.

This series is the result of a trip to a place I didn’t know in advance. I convinced the different groups and individuals to participate in this surrealist portraiture adventure.
The final portraits are as important as the process -the making of. What interests me more from this project is “the photography as an event”. Making groups of unknown people to pose, being themselves, standing on the water, makes the whole process a performance. The final result are images which style is marked between social document, portrait of the rural Spain and a social experiment / artistic performance process.

Lucía Herrero (1976) studied architecture and photography in Madrid, Amsterdam and Barcelona, as well as Physical Theatre – Jacques Lecoq Technique. The study of these three branches of art and her experiences travelling the world have conformed Lucia as the artist she is now. Over the last two years she has developed an approach to documentary photography called by her Antropología Fantástica. It is a mixture between social science and artistic intervention. She portraits people and cultures with both drama and fantasy elements. The people photographed are always real, not actors. It is a photo-event where the subjects interpret themselves and where Lucia composes them in the space as if they were notes on a stave.