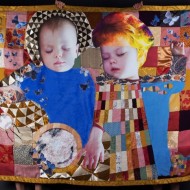 Agata Szuba
Agata Szuba (born in 1985. In Olsztyn) is a graduate of the University of Warmia and Mazury and the Academy of Fine Arts. E. Geppert’s in Wroclaw. Since 2014 she has been a member of the faculty at the department of Media Arts Academy of Fine Arts. She Cultivates disciplines such as photography, photographic object and installation, video, multimedia projects and graphic design. She is the author of five individual exhibitions and participant of twenty collective displays in the country and abroad.

„Freedom, march into the kitchen!”
Freedom, march to the kitchen! In large-format photography young woman who is also an author of the installation is sitting in the kitchen, her hand is holding a knife and cabbage, and in the air are swirling red and white confetti, which like the architecture of the room seem out of place.

Freedom is summoned to the kitchen to make it the status of emergency and instrumental utility.

The woman, as guardian of the hearth, is fighting for the dignity and independence, defends their beliefs and place on earth. She demonstrates its strong position turning sword to knife, a shield to cabbage, which in its conviction have the same firepower.

Confetti shows a remarkable celebrating shown gesture and thus is the crowning triumph.

Aleksandra Bełz-Rajta
(born in 1986, in Biłgoraj) she finished Art School of Bernard Morando in Zamość. License diploma from painting in 2011 in the studio of Intermezzos and the Picture at Marie Curie Skłodowska University in Lublin. Master’s thesis done in 2015 in the studio of Photograph Of academy of fine arts for them. of Eugeniusz Geppert in Wrocław. In she art she move between all sorts media, mixing them up with itself, and create new quality.

„NOT A PRIVACY”
Project NOT A PRIVACY is dealing with the subject matter of the privacy. A subject of the project are objects which are most valuable for them owners. He is showing the way of the touch left by the owner on this object. We can to say that it is track of the identity, presences of owner.

Ewa Buchta
(Born in Opole in 1991) currently living in Wrocław. received a bachelor degree in the Opole University – Institute of Art, participated in the Erasmus student mobility program, studying communication design in the Braunschweig University of Art, currently studies at the E. Geppert Academy of Fine Arts and Design. She occupies herself in graphic design, illustrations and motion graphics and lately also in photography. Loves to travel. In her works she tries to capture character and the diversity of human’s psychology.

„Therapy”
Our space often reflects our lives and inner feelings. Disorder is a demonstration of deeper, hidden problem and the process of ordering is some kind of a therapy. All the drafts and drawings made on pictures and finally a more precise sketch, show the process of thinking and consecutively instigated steps. It is the whole sequence of thoughts, ideas connected with the notion of our reality.

Maria Downarowicz
(born in 1983 in Wrocław) after high school she moved to London where she studied Fashion Photography at The University Of The Arts London. Her photographs were exhibited in such galleries as The Richard Young Gallery, published in magazines such as ID, Dazed and Confused, Guardian, Cooltura. During that time she worked as creative director and fashion photographer at different photo and video shoots (ei. During London Fashion Week). Maria worked as The photographers assistant for Marc Lebon. After coming back to Poland Maria studied Photography and Multimedia at The Academy of Fine Arts in Wrocław. During that time, twice she become a mother and the theme of motherhood become an inspiration for her final work called „To Hug”. The series received a distinction and was exhibited at the MY2015 exhibition in Galeria Awangarda in Wrocław and also has been exhibited at the Center for Culture and Art in Wrocław.

„To Hug”
Motherhood: The biggest wave of love, happiness and connection with old primitive powers mixed with fear, uncertainty curiosity and pain. After becoming a mother I had a great need of finding a way to express those strong emotions. Patchwork was traditionally created by women to cover and protect their loved ones. This art piece incorporates different materials and fabrics as well as photograph printed on canvas. It’s designed so it can be used and therefore become a part and a witness of life. The plush phantoms are created to enhance those positive emotions, be crying and laughing out loud they call for our attention.