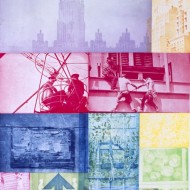 „Robert Rauschenberg Travels” is an exhibition of prints and photographs by Robert Rauschenberg (1925-2008), the American painter, sculptor, printmaker, and photographer. He was often characterized as the first post-modern artist, and is widely acknowledged for his originality and influence. Much of what we take for granted in the art of today — the use of found materials, the blurring of lines among genres and media, and the appropriation of text and pictures from popular culture sources — is evident in Rauschenberg’s seminal work as early as the 1950’s. It emphasizes Rauschenberg’s photographic work, both in its own right and as the source of the images that the artist would crop, color, collage, overlap and repeat in paintings and as silkscreen, gravure, or Iris prints. The exhibition features the complete seven-print series of oversize photogravures, Soviet American Array, begun in the USSR in 1988. These large and dramatic works are complemented by 37 black and white photographs, made mostly in the 80s and selected from the Rauschenberg Archive, and by enlargements of contact sheets from the artist’s 1989 visit to Moscow and Leningrad, now known as St. Petersburg. This is the first showing of this many of Rauschenberg’s works in a Polish institution and the first showing of work from this time period. Poland’s overall lack of exposure to Rauschenberg and the other stars of American art in the second half of the 20th century is paralleled by American ignorance of Polish art of that same time. Both sets of circumstances can be seen today as collateral damage of the Cold War. It is fitting indeed that work made in the 1980’s as an action for international understanding can be exhibited in Poland now as evidence that such understanding is possible.

The exhibition concentrates on a small slice of Rauschenberg’s prodigious and wildly varied oeuvre, the Rauschenberg Overseas Intercultural Exchange, a program of exhibition and performance in the 1980s that took the artist and a team of his associates to Mexico, Chile, Venezuela, China, Tibet, Japan, Cuba, the USSR, Malaysia, and what was then divided Germany. The project took its final configuration as a continually evolving selection of work, including new work made in response to the artist’s experience of his host country, and work made in previously visited sites to be shared with the next country in line. The acronym for the program was cheerfully pronounced “Rocky,” the name of the artist’s pet turtle on Captiva Island.

Rauschenberg’s photographs have generally been studied as highly manipulated source material for his works on paper, but as the selection of black and white images reveals, he captured the eye-catching details of the world with his camera, producing quirky, intelligent, brilliantly composed images of great value in their own right.