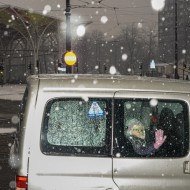 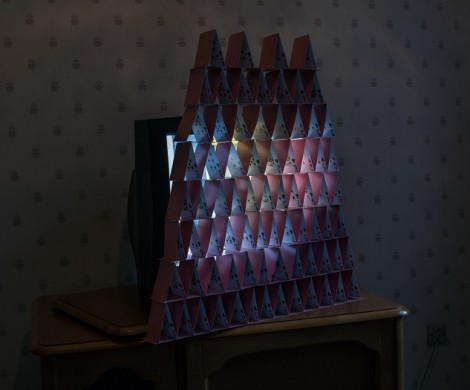 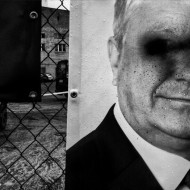 “Flâneur –New Urban Narratives” is an international project, implemented by over a dozen partners from European countries. Fotofestiwal invited three world-famous photographers, Dima Gavrysh, Crsitina de Middel and Alexander Gronsky, to participate in the Łódź edition of the project. During 15-day residencies, exceptional and original projects, analyzing the city landscape, its inhabitants and the experiences of a stranger, were created.

“People’s Republic of Łódź” by Dima Gavrysh is a conceptual project based on a dystopic story that never occurred, but could occur, in Łódź. Using the materials created during his stay in the city, appropriated photographs and pictures from his other projects, Gavrysh creates a fictional story based on the current political and geopolitical events. This endeavor demonstrates how dangerous words and pictures can be in the hands of media propaganda and how easily can truth be distorted by stories based on understatements.

Alexander Gronsky, known for his long-term projects, this time took on a role of an urban wanderer. Taking advantage of the temporary nature of his situation, he presents his thoughts on the transience of the city, treating the buildings and their inhabitants whom he passes in the streets as equal to falling snowflakes.

The “Hotel Hotel” series, created during the residency of Cristina de Middel, is a tale of the place which became the central point of urban wandering in wintery Łódź: the hotel where the artist was staying. De Middel takes us to the world of horror films, fairy tales and unexplained phenomena, inviting the people she met during her stay to take part in her play, in which she toys with numerous popcultural references and with her own imaginings, triggered by the ambience of the place.

Baudelaire describes the flâneur as someone who wanders around the city with the purpose of experiencing it. Since then, the concept of the flâneur has been used as a tool to help understand urban phenomena and modernity, in economic, cultural and historical terms. Walter Benjamin refers to the flâneur as a product of modern life, an asphalt botanist, and defines the city as the sacred ground of flânerie.

Following the dynamics of the 20th century, the relationship between the art practice and the urban context, became particularly fruitful – as the so called spatial practices show, questioning the city with the contribution of different media and techniques, and defining the artist as a stroller, a wanderer, a flâneur.

Flâneur – New Urban Narratives is a network project based on an international partnership of some 20 organisations from 11 different countries. Its main purpose is to carry out artistic interventions in public spaces through contemporary photography.

The Project encourages artists to create new interpretations of the urban terrain, having the concept of flâneur as a starting point and considering the physical context of the city as a social kaleidoscope in constant evolution. Besides the art projects and interventions in the public space, Flâneur is comprised of several other dimensions brought to light in workshops, masterclasses, artistic residences, creative camps and conferences – initiatives intended to foster a critical analysis of contemporary photography and contribute to a discussion about the public space as a social territory.

During its two year span, Flâneur will be represented in the 13 partner cities. The artwork is created by photographers invited to pursue artistic residences in each city, as well as local photographers, thus mixing outside and inside point of views, and it’s further complemented by the artwork produced in ateliers open to local residents. The work created in all these cities is presented in photo exhibitions in public spaces, bringing to the squares, parks and streets pieces of artwork, which would normally be enclosed in museums and galleries. It’s, at the same time, a process of deconstruction and democratisation of art enjoyment, sharing it with a heterogeneous audience.

The exhibition display, based on modular backlit structures, allows for a specific design in each of the different spaces. The display itself becomes a replication of the city, open and accessible 24 hours a day.

Flâneur generates a transversal overview of the different social dynamics which are the fabric of the urban territories. The peculiarity of this particular “portrait” is the fact that it’s produced by a broad and diverse group of creators, who, with a common theme, take a fresh look at the plurality of realities that define each urban space. Flâneur shares with the public these contemporary and plural views, inviting you to engage in your own flânerie around your own city and rediscovering it.

The city, as a whole, is the geographic scope for the invited photographers. With the Project theme as a starting point, the photographers are then free to explore the city during the 15- day artistic residencies.

The Masterclasses and ateliers are organised preferably within the area of the exhibition, aiming at specific neighbourhoods or quarters and engaging schools and local associations in order to involve the local residents with Flâneur.

15-day artistic residency. Taking photos for the public space exhibition. The work created by the invited photographers depicts an outside view of the city.

PHOTOGRAPHY EXHIBITIONS IN THE PUBLIC SPACE

The work produced in the artistic residencies is exhibited in the public space (squares, parks and other places) of the partner cities, in Flâneur’s site specific display.

The Masterclasses and ateliers are aimed at new photographers and local residents of the exhibition area. They encourage the creation of photographic narratives of the city or the neighbourhood, from an insider’s point of view.

Blindwalks is a performative drift based on a blindfolded walk in the neighbourhood, accompanied by a guide, while photographing the tour.

Which photos do we “see” when we are not watching?

What makes us want to “watch” and capture? How do we experience the city and the act of wandering when we can’t see?

This activity promotes the interaction of the visiting public with the core ideas of Flâneur.

The International Conference “Flâneur – New Urban Narratives” held in Lisbon on the 12th and 13th May 2015, was the key moment of the programme. It provided a broad forum for exchanging ideas among the participants and launched Flâneur, both at national and international level. The papers and debates are now part of an important knowledge database which will allow the Project to continually expand throughout its two year life.

Created and developed by Procur.arte together with the network partners, Flâneur

is supported by UNESCO through the International Fund for Promotion of Culture, and by the European Union, through the Creative Europe Cooperation Projects of the EACEA (Audio-visual and Culture Executive Agency).