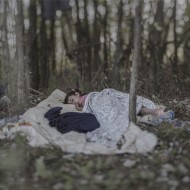 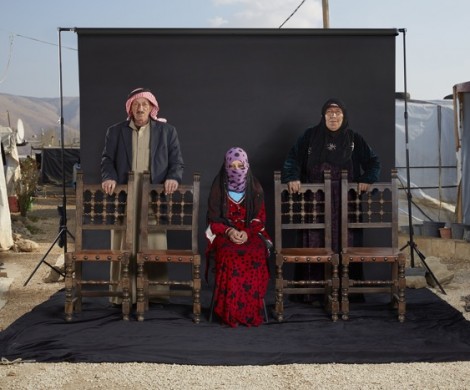 As Fotofestiwal Lodz considers Travel and Photography, we recognize that not all travel is by choice. „Displaced“ shows international artists and activists responding to the worldwide refugee crisis. It includes photographs and video by artists from several countries as well as a photo-based public art project undertaken by Greenpeace and Médecins Sans Frontières. The exhibition documents the refugee experience itself and demonstrates the many ways photographs can tell this story.

American Michelle Frankfurter documents the illegal and dangerous journey from Honduras, El Salvador, and Guatemala across Mexico to the United States, with an emphasis on the unaccompanied children who are coming in great numbers, fleeing poverty and gang and political violence. This selection of black and white photographs from her 2014 book „Destino” shows the migration crisis in the Americas. Frankfurter travelled with groups of these children and teenagers as they moved northward by train, truck and on foot.

Drowned is a conceptual print, video and performance work by Argentinian photographer Seba Kurtis. In a striking personal technique Kurtis uses salt water-damaged film to make images of the hostile coasts of the Canary Islands in a harsh bleached out palette that evokes atomic bomb blasts or other nightmares. The work suggests the experience of African migrants who stop there en route to Europe. The video documents the performance of this piece in which negatives are thrown into the Mediterranean. Only the few that wash ashore are printed.

American Lorie Novak is best known for her work with vernacular and popular culture photographs. „Refugees above the Fold”, her installation in Displaced is a free-standing component from the larger project „Above the Fold,” her self-described exploration of the afterlife of images and the politics of archiving. Working with paper editions of the New York Times, which she has been collecting since the NATO bombings of Kosovo, in 1999, she creates monumental piles organized by the image content of each front page’s principal photograph. Her Lodz installation addresses media coverage of the refugee crisis worldwide. In addition to a rendering of 15 years of news, monitors in the installation display an archive of categorized images and document the increased in media attention to the refugee crisis of the last few years.

Magnus Wennman’s Where the Children Sleep is a series of simple but moving photographs made across Europe over this last winter. As the title suggests, this Swedish photographer has captured the plight of the youngest refugees, asleep, in woods, on floors and old mattresses and sometimes wherever exhaustion has overcome them. The photographs are quiet and direct, yet universal, offering a humanizing counterpoint to the rhetoric that portrays these often-desperate people as a faceless horde threatening Western civilization. This series has been widely published and has been recognized for excellence by World Press Photo.

Italian-born, London-based photographer Dario Mitidieri sought to record the impact of war and mass migration on the Syrian families left behind using the long-established conventions of family portraiture to show the presence of absence. Working in the refugee camps of Lebanon’s Bekaa Valley, on the Syrian Border he creates images of families in which an empty chair or counterintuitive space in the grouping represents family members lost to war. The use of the backdrop in the midst of camp life acknowledges the presence of the photographer and reminds us we are looking at a photograph of people rather than the people themselves, yet the family portrait motif is universal as is the pathos of this challenge to it.

On New Years Day, 2016, a Médecins Sans Frontières/ Greenpeace team on the Greek island of Lesbos were joined by groups such as Sea-Watch, the Dutch Refugee Boat Foundation and local communities, to create a peace sign formed from over 3,000 discarded refugee life jackets calling for safe passage to those fleeing war, poverty and oppression. These groups staged this photograph to raise awareness of the refugee crisis through the power of photography and viral social media.