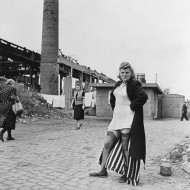 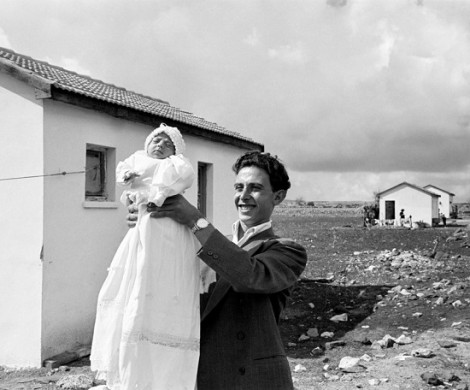 David Seymour, know as Chim, was born Dawid Szymin in Warsaw in 1911, the son of a prominent publisher of books in Yiddish and Hebrew. In the early 1930s, he went to Paris as a student but his interest in photography led to a freelance career, first in France and in Spain where he covered Spanish Civil War between 1935 and 1938. He travelled to the United States in 1939, enlisted in the US Army as World War II began, and became a US citizen in 1942, the same year his parents in Poland were killed by the Nazis. Following the war, he worked for such major picture magazines as LIFE and Paris Match and for UNESCO in Austria, Hungry, Italy, Poland and Germany. Not surprisingly, Seymour took a great interest in refugees, documenting the Republicans fleeing to Mexico after Franco’s victory in Spain, and the plight of refugee children across war-shattered Europe in moving black and white photographs that remain some of his best-known and best-loved work. In 1947, along with friends and fellow photographers George Rodger, Robert Capa and Henri Cartier-Bresson, Seymour co-founded Magnum Photos, the legendary photographic cooperative. He became president of Magnum in 1954 and held that position until his death in Suez in 1956.In his last years Chim made his home in Italy. He photographed the first years of the newly established state of Israel and became known for his portraits– -often in color– – of such celebrities as Pablo Picasso, Sophia Loren, Ingrid Bergman and Audrey Hepburn.

Chim is often cited under the rubric of “The Concerned Photographer” and his humanism and compassion inform most of his work and make it particularly relevant today, The exhibition is divided into three sections: an introduction, a focus on his Polish photographs and a special selection of rarely seen color portraits of film stars, offered in recognition of the exhibition’s situation at The Film Museum.