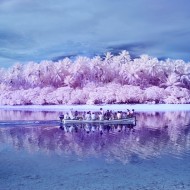 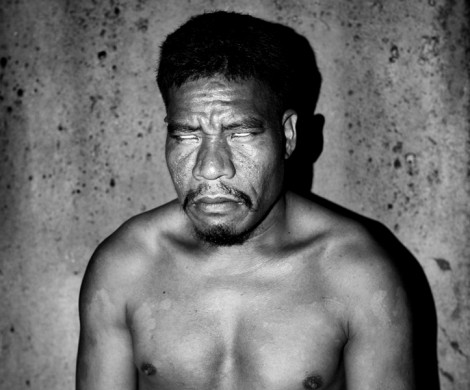 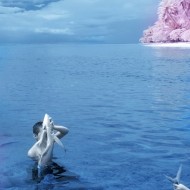 The Island of the Colorblind

In 1775 a catastrophic typhoon swept over the island Pingelap, a tiny atoll in the Pacific Ocean, leaving only 20 survivors. One of the survivors was the king, the ruler at that time carried the rare achromotopsia gen that causes complete colorblindness. The king went on to have many children and by the time the island reached the 4th generation of Pingelapese after the typhoon most of the inhabitants saw the world in black and white.

Initiating my visual research in Micronesia I tried to find ways to envision how people with achromotopsia see the world, to try and see through their eyes. Daylight is to bright to bear, moonlight turns night into day, colors dance around and take another place. Imagine fire burning with flames lighting up in black and white, trees turning pink, waves of grey; a rainbow revisited.

Color is just a word to those who cannot see it. What if the colorblind people paint the world in their mind, what would color look like, how would they color the world, the trees, themselves. Green is often referred too as the favorite color of the islanders, growing up in a lush environment, living in the jungle.

But green also appears to be the color that the most common kind of colorblindness doesn’t recognize. I learned that the color they can distinguish most, although they can’t really see it, is red. I photographed with a camera converted to infrared, programmed to read the light and the colors different.

The absences of color, the visual impairment of those that on the island are described as „blind“ results in images that mask their eyes, their face, or their „vision“ and at the same time enter a dreamful world painted by colorful possibilities.

Belgian photographer Sanne De Wilde graduated in 2012 at KASK (Royal Academy of Fine Arts) in Ghent (Belgium) with great honours. Her photo series  „The Dwarf Empire “ won the Photo Academy Award 2012 in the categories Volkskrant Magazine and De Morgen, as well as the International Photography Award Emergentes DST in 2013. Her serie Samoa Kekea, about albinism in Samoa, was awarded the Nikon Press Award 2014 for most promising young photographer. The British Journal of Photography selected De Wilde as one of  „the best emerging talents from around the world”. Since 2013 De Wilde works as a photographer for the Dutch newspaper De Volkskrant.