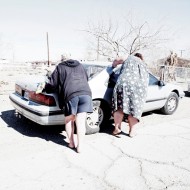 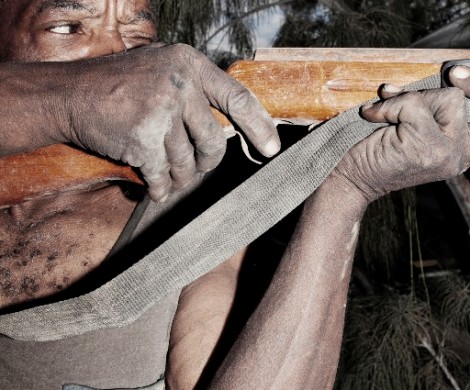 For some people the desert represents decay and death. There is scarcity of water and shade, extremely temperatures and a lack of resources for humans to survive. But at the same time there is a long tradition of the desert as a place of healing, both physically and spiritually.

With the Californian desert as background, „Happy Nothing” is a personal journey that delves into the lives of its inhabitants and its secrets. Here is where ex-convicts, war veterans, retirees and people that for some reason have decided to stay outside of the society live. In these towns there is no running water, the houses are in ruins, the streets unpaved, without street lighting, there are no supermarkets or entertainment infrastructures. But despite living in this conditions, they call it the Paradise.

After graduating as a senior technician on image and study a specialization course in photojournalism at IDEP (Barcelona), I had the opportunity to assist recognized photographers from national geographic as Tino Soriano and Annie Griffiths Belt. At 2007 I began working on my own projects and I have won awards and fellowships including: the 1st prize of the Vanguardia Magazine, (2007), the scholarship of the “XIII International Meetings Gijon photojournalism” (2009), the workshops Magnumphotos scholarship with Chien-Chi Chang (2009), an honorable mention in the “Travel Photographer of the Year” (2011), the selection for Photoespaña Discoveries (2011), being finalist of the Fotopres Grant (2013), the award of SFR Jeunes Talents for ParisPhoto (2014) and the recent Open Call award of the Encontros da Imagem (2015). Burn Magazine, , Foto a Foto, Bonart, Descobrir Catalunya,Fotografia Magazine, F-Stop Magazine, Piel de Foto, Lens CUlture, Positive Magazine and Ojo de Pez, are some of the media in which I have published.