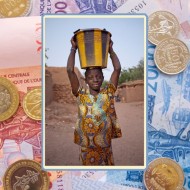 Francois Deschamps was raised bilingually in New York City and travelled to France alone when he was 11 years old setting the tone for a life of wandering. He was studying topology at the doctoral level when a teacher gave him the confidence to follow the childhood dream of art. This analytic education set the stage for the dance between concept and form which pervades most of his work. His art is an attempt to unravel the mystery of a multicultural world of colliding realities His arsenal is pathos, humor, and the chaotic contributions from that complex and baffling world. He sometimes thinks of himself in the third person as a character in an elaborate ambiguous narrative. Francois Deschamps teaches photography and related media at the State University of New York in New Paltz. He is a photographer and book artist whose work involves travel and the relationship between cultures. He has produced artists’ books published by the Visual Studies Workshop, Nexus Press, and the University of Auckland. Photographs and books are in the collection of the Museum of Modern Art (NYC), The Metropolitan Museum of Art, and the Museum of the Art Institute of Chicago. He has received two fellowships from the National Endowment for the Arts, as well as two individual artist fellowships from the New York Foundation for the Arts. In 2002, he was awarded a residency at the Cité Internationale des Arts in Paris. He was awarded a Fulbright fellowship to Mali, Africa, for 2010-11

Photo-Rapide takes place in Mali in 2010-11. Photographers are said to take photographs. This project seeks to reverse this notion by giving instead of taking photographs. Deschamps offers to make a photographic portrait that he prints on the spot. He thinks of the subject as a collaborator and client whom he must please. Together they examine the image files on the camera back and discuss how they want to be represented. In the end, the image the client likes is picked—not always the Deschamps’ choice. The client then chooses from a selection of some 100 card “frames” Deschamps has made based on Malian objects and themes. The print is adhered to that card frame. The procedure of creating this shared image is documented by photographing the client holding the framed image. At the conclusion, the client is handed the print in a rubber-stamped envelope.