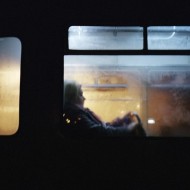 Jacek Fota is a freelance photographer based in Warsaw, Poland. He graduated with a Masters degree at the University of Utah, U.S.A. After graduation in 2008, Jacek returned to Poland and got involved with photography. His interests lie in documentary photography and he usually works on long-term projects that require time and dedication to the subject matter in order to portray it accurately. Jacek works with the Anzenberger Agency.

The series illustrates the tram line number 46, which connects the city of Łódź and towns of Zgierz and Ozorków. It is the longest tram line in Poland and second longest line in Europe. It opened in 1922 and it played a major role during the textile industry growth at the agglomeration of Łódź. The line is over 29 kilometers long, it has 47 stops and the time of travel between the loops is about 95 minutes.