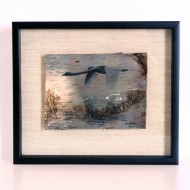 Jacek Lamparski – film studies graduate who deals professionally with advertising photography by combining his work on film sets with later post-production. His own projects are usually devoid of commercial glamour and created in remote areas of the world.

His latest exhibitions were held at:

“Altered states of reality – the Asian Way” is an exhibition comprising a few dozen works printed using an atypical technique, on an aluminum compositional plate. It draws inspiration mainly from Asian reality, both in the form of buildings, with the specific, magical ambience of the place, as well as of people and the spaces that surround them. Even though photographs seem obvious, owing to the use of the abovementioned techniques their perception changes slightly, deviating from the traditional images on photographic prints.

Despite sedentary lifestyle, most of us dream of faraway journeys and wanderings. The freedom which people would like to enjoy is often compared to the freedom of the birds, with their unlimited freedom of movement. The entire project was created with mobile phones. Works were transferred onto barks using various techniques.