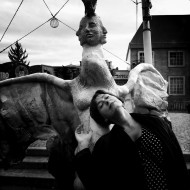 She has collaborated with Thessaloniki Museum of Photography in Greece as a researcher and curator. She used to be the artistic director of the M55 projects Gallery in Athens inviting young photographers from European countries to exhibit in the gallery and promoting Greek photography abroad. She collaborated with the Photographic Center of Skopelos. She has curated several exhibitions and she has edited photography books in Greece and abroad. She holds a PhD in History of Photography, from the Panteion University of Athens. She has gained a scholarship from the Princeton University, USA to research the archives referred to Greek Civil War and Greek Resistance against Nazis. She has being working, for a decade, as a photography critic, in the most respected newspaper in Greece named “To Vima”. She has participated as reviewer in many festivals in Europe such as, PhotoEspana Madrid, Sifest Savignano, Fotofo Bratislava, Fotografia Europea Reggio Emilia, Fotofestiwal Lodz. She has written numerous academic essays and she has published articles concerning History of Greek and European photography. She has given lectures to different Universities and Photographic Associations in Greece and abroad. She has participated in the Encyclopaedia of European Photography presenting the Greek History of Photography from 1900-1969. Recently she is the responsible of photography exhibitions at Ikastikos Kiklos Gallery based in Athens.

I’m interested in all kinds of contemporary photography on different concepts. Reportage front line is also my taste.