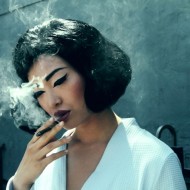 Pola Esther was born and raised in Poland. The legend says she was kissed by the Pope and that event made her who she is. Esther likes to photograph nature, mostly human. In her work she reflects upon her intimacy, femininity and sexuality. She is constantly looking for visual fantasy in commodities. Not only searching for beauty in it’s given form but also in it’s peculiar dimensions. Potential for eroticism is often central and even essential to her projects. She is currently based in New York City. In 2015 she presented an installation “EYE.EAT.YOU” at Kleistpark U-Bahn station with Platform Berlin. Her photographs were shown at Cutlog Art Fair (during Frieze Art Week) in New York in 2014 and Fotofever in Paris in 2015. During summer 2014 she participated in artist residency in Bulgaria culminated in pop up exhibition “Adam and Eve. News from Paradise” in Nuance Gallery, Sofia (with painter Brian Keith Stephens). Pola is frequent contributor to french Purple Fashion Magazine and her work has been reviewed and featured in various international print and online publications. Besides photography she acts as creative consultant and had a chance to collaborate on video productions for Beyonce, Lenny Kravitz and Korean boys band Big Bang. She is always ready to play and experiment.

“Mutual Attraction” is a series of diptychs. Each pair of images tells their own secret. The collection circulates around visual variations on physicality and sexuality. In this project I play around with juxtaposition of imagery and explore surfaces of delicate provocation by creating a dialog between two photographs. I attempt to penetrate the mundane and push common objects, situations into a world of sensual fantasy. Via chosen images I relate a lot to the concept of body as texture and shape and as receptor of physical impulses manifesting emotional needs. I expose and share my surreal fascination with how elements of nature as vegetables, fruit, animals paired with human form can almost tangibly express human desires.