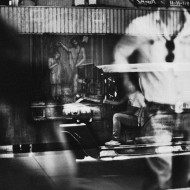 “Response” is a part of original projects whose result comprises a sum of individual experiences collected during travels through Asia. When we ask ourselves questions and confront them on the way, in a more or less conscious manner, we often receive as a reply subsequent ones, which in return may constitute and bring relevant answers. This assumption is the basis for the title response, which may be the very subjective and individualized (depending on the location), noise which we create when disturbing the ground explored.

Agata Hejchman
Her project constitutes a kind of photographic poem, created as a result of observation and interaction with the pre-existing reality. It reveals the dependency of men settled in a given situation in isolation from their habits. Response is revealed in the simplicity resulting from the gift of the moment, which we often only notice and appreciate after leaving our comfort zone. The author is captivated by a certain underrated simplicity and humbleness of the process. In her search, response is relative to the credibility and the assimilability of the given circumstances.

Tomasz Włodarczyk
In his project, he concentrates on the Philippines – a country where the emotional and ethical values often prevail over the material, consumption ones. The inhabitants of the area, who are subject to losses on account of typhoons or earthquakes, often concentrate on the goods which the elements cannot take away from them – family ties, closeness to nature, the appreciation of small things and of the everyday life. They notice the things which the “Western civilization” passes by and which give them strength and inner enrichment. The author attempted to discover how the most sensitive persons – the children – fare in such reality. Are they happy? Response is the emerging question which we ask ourselves no matter where we are and where we live – what does actually matter in life?