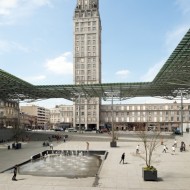 Markerink lived the first 12 years of his life roaming between Indonesia, the Netherlands and Germany before settling with his parents in the Netherlands. With an early interest in painting, writing, film and photography, he went to art-school in the late 70’s to become a painter and there made the switch to the medium photography. He first attracted attention with the project Stadsstillevens (City-stills), depicting street-scapes of Amsterdam in a documentary tradition which was in breach with the then ongoing Dutch tradition of social photography. He later established Fragment Publishers with some friends to rejuvenate the almost extinct tradition of well published photo-books in the Netherlands where books by Ed van der Elsken, Cas Oorthuys, Johan van der Keuken, Hans Aarsman, Henze Boekhout and Wout Berger among others would later emerge. Between 1976 and 1981 he traveled regularly to the Caribbean and became involved in the struggle for land-rights of the indigenous Indian tribes of Surinam, after which he meets the photographer Theo Baart while both working on the Rijksmuseum assignment Post-war Housing in the Netherlands. This led to regular collaborative projects and publications and a long-lasting friendship. After his first major project with Baart, he became fully involved in landscape photography as a means of reflecting on culture and was awarded the Amsterdam City Maria Austria Prize for my landscape photography. The collaboration with Bart initiated the project Snelweg/Highways in the Netherlands in which they photographed the ‘forgotten landscape’ representing the turbulent economic progress and presented the landscape of the highways as not just a means for moving towards a goal but as a place or landscape in itself. Together they established Ideas on Paper Publishers to publish Snelweg without making commercial compromises and as a means for facilitating future projects.  He then started the project Memory Traces in which landscape, history and (personal) memory are interrelated and photographed in Bikini, Sarajevo, Chernobyl, Japan and Vietnam amongst others and later decided to include writings. Memory Traces was published by Ideas on Paper in December 2009. Markerink was invited in 2008 by the European Eyes on Japan project to photograph Nagasaki from the perspective of it’s history and has since worked on a project about the devastating effects of the European-subsidized introduction of Eucalyptus plantations for low-grade paper production in Portugal. While exhibiting internationally his works are also collected privately by the likes of the Municipal Archives Amsterdam, Rijksmuseum Amsterdam, Stedelijk Museum Amsterdam, Rijksdienst Beeldende Kunst Den Haag, Worldmuseum Rotterdam, Municipal Collection Almere, Ministry of Agriculture Den Haag, Nieuwland Erfgoed Centum, Lelystad and George Eastman House Rochester NY.

Theo Baart Born in Amsterdam in 1957, Baart moved to Hoofddorp in 1960, returned to Amsterdam in 1977 and moved back again to Hoofddorp in 2004. The distance between Amsterdam and Hoofddorp is 20 kilometres. Questions of development reflected in culture visually and the way it forces itself upon a photographer has become the theme of his works. Specifically the permanent friction in Dutch culture between the urge to control the process of change and the usually rather uncompromising or surprising practice has become his point of reference. He tries to make his photo work enter into dialogue with other disciplines, such as environmental planning. Some of his books are about the places where he has lived: Territorium and Eiland 7. In these books he combines his photos with his own texts. It’s too personal to outsource that. In other projects he asked journalists or writers to contribute their work: Bouwlust and Snelweg. Some books have been made in collaboration with friend and colleague Cary Markerink: Nagele, Snelweg and Nagele [revisited]. Making photobooks means also working close together with translators, editors, graphic designers and printers. It is never a solo exercise. He sees the photobook as an ideal form of presentation of his work, using the strict form, and the rigid context to his advantage. He hopes though that individual photographs can survive and will be appreciated outside the context of the photobook.

Photographs After Baldus is a contemporary photographic study of the Somme area of Picardy in France, crafted in response to a similar study completed in 1855 by Eduard Denis Baldus following the route of the Chemin de Fer du Nord. The new images show both change and continuity in the region that runs from the depressed coastal city of Boulogne-sur-Mer to the Parisian banlieux of St. Denis and Creil. Baart and Markerink emphasise the infrastructure of roads, bridges and railroads, as Baldus did, but today raise questions about place, memory and history, including two World Wars.