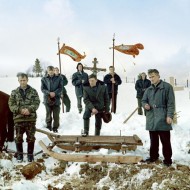 “Boiko” is a universal photographic story of life at an old-time European village. Interestingly, the story is happening right now, in the Ukrainian Carpathian Mountains, where magic intertwines with reality. Here Jan Brykczyński came across the world he remembered from fairy tales he had been told in his childhood. The place epitomized his idea of a rural idyll. “BOIKO” tells a story about that place, its inhabitants, their life cut off from the rest of the world, immersed in tradition and beliefs. It is the first book authored by Jan Brykczyński. In 2009 he visited a village in the Ukrainian Carpathian Mountains, mere few kilometres from the Polish border. He kept returning to the village for the next three years. Slowly, he managed to win the trust of its inhabitants, isolated from the world by the mountains. They gradually let him into their lives, in which magic makes things happen, thoughts have instrumental energy, white magic grapples with black magic and good grapples with evil.

Jan Brykczyński, b. 1979, woks in the field of documentary photography. He studied cinematography at the Polish National Film, Television and Theatre School in Łódź, the FAMU Film School in Prague (Film and TV School of the Academy of Performing Arts) and currently at the ITF in Opava. In his work Jan often focuses on European peripheries and the complex subject of human beings’ relation to nature. He is recipient of scholarships of the International Visegrad Fund and the Ministry of Culture. He won awards at numerous photographic competitions, i.a. 2013 The European Photo Exhibition Award and the Syngenta Photography Award. He is a co-founder of Sputnik Photos, the International Association of Photographers. He is a member of Anzenberger photographic agency in Vienna. He lives in Warsaw with his wife and daughter.