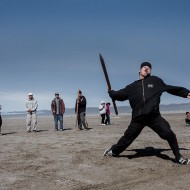 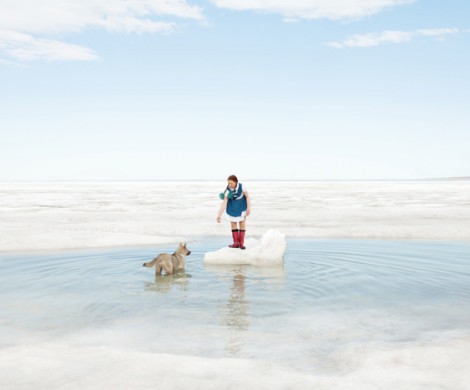 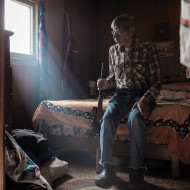 Evgenia Arbugaeva, Tiksi
„Once upon a time in Siberia, on the shores of the Arctic Ocean, in a warm bed in a small town, a little girl woke up from a dream. It was morning, but it was still dark out, for the little town was so far North that the sun would not show itself for many months. The little girl smiled and her mind began dreaming of the days when the Polar Night would come to an end, when the first sun would light up the snowy mountains, making it look like blueberry ice cream. And then the summer would come, the snow would melt and the tundra would transform into planet Mars with it’s golden color seeming to stretch out forever in every direction. She thought to herself, Every season has its own colors. She stored all these colors in her heart, and walked beneath the Aurora Borealis in this little town way up North.” The town was called Tiksi. The girl’s name is Evgenia Arbugaeva. After years spend abroad she came back to her home town and photographed Tiksi as she has remembered it. Arbugaeva works as a freelancer in Russia and New York. Her works has been shown worldwide and published in magazines such as Elite Traveller or the Zoom.

Ciril Jazbec, Waiting to move (newcomer award)
The project shows life of the citizens of an island no wider than 400 meters and 5 kilometers in length, on the north-west coast of Alaska. The island is threatened by erosion, storms and inclement weather, as well as by the thawing of permafrost, which lies below a thin layer of soil. The land is populated by Shishmaref – a modern Inupiaq Eskimo community, which became the focal point of global media attention few years ago. Photos of storms, erosion and houses sinking into the sea was published worldwide. The island became symbol and concrete example of the dramatic effects of climate change. Al Gore referred to the people of Shishmaref as the first climate refugees and asked how the community of 650 would survive the following years. Ciril Jazbec was one of very few, who Shishmaref trusted and let him witness their lifes. The photo series documents the daily life in the community as it is today and the disappearing traditional ways in a village facing an uncertain future. Life in Shishmaref is not easy at all, and there is a deep divide between old hunters and fishermen who live in accordance with their centuries-old traditions on the one hand and young people on the other, who play videogames on their iPads and Playstations and dream about leaving the island where there are no jobs and little to look forward to.