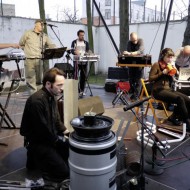 The ensemble is a construct of unstable form. It is torn by the tensions which it itself produces. Trajectories of forces develop in all directions. Harmony of conflict. Order of chance. Constancy of entropy. Without limits. The ensemble is a generative, organic web, where a body of a performer intertwines with a body of an instrument, where a dry sound intertwines with a resonant one. Macro and micro- worlds span in parallel perspectives. With no end.

MAX 30’  is an audio-visual performance by RUMORY ORKIESTRA [Rumors Orchestra], a group that is known for actions inspired by futurism, musique concrète, and industrial music. They use unconventional sources of sound, fabricated accoustic instruments and voice. Creation of sound is a physical effort and it is an effect of multidimentional direct interactions and feed backs between people, between a human and an object/instrument, between sound and image, image and word, movement and surroundings. The performance includes monophonic quadrophony and  projections generated during the action.

Aleksandra Chciuk – audiovisual artist, performer, student of photography of Łódź’s Film School. She’s an author of video works concerning gesture, human phisicality in connection to nature, in connection to another human, or to an object.

Gerard Lebik – creates sounds and music through improvisation, musical scores and manipulation of sound material through accoustic and electronic mediums.

Marcin Pryt – has released many albums as author of lyrics and a vocalist with the bands: 19 Wiosen [19 Springs], Tryp, 11.