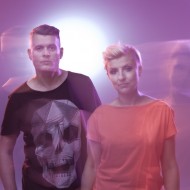 Perła will rock the house!

Novika & Lex
Members of the Beats Friendly collective have been active on the clubbing scene for years. They are pretty eclectic and open in their performances. They are also very efficient in encouraging people to come to the dancing floor. Their achievements include two parts of the “Friendly Beats” compilation. They performed during major festivals in Poland (Open’er, Audioriver, Tauron Nowa Muzyka, No Border), and they regularly attend the most exciting clubs. Novika as a singer debuted with the Futro band. Then she performed for Smolik records and worked together with many producers including Marcin Czubala (“Stay Close” – Mobilee), Lovebirds (“This Time” – Toolroom), Biernaski (“Give Away”). She released three solo albums and an album with remixes; she is a two-time winner of Fryderyk. Her latest album, „Heart Times” released in April 2013, was positively reviewed as the most mature in the artist’s output. Novika and Lex are hosts of the Miastosfera programme on Radio ROXY. Previously the duo were hosts in Radio Jazz and former Radio Bis (now Czwórka). In addition, Novika is the host of the programme called Leniwa Niedziela (Lazy Sunday).