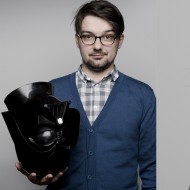 The discussion around ideas and creativity Allan Sekula and Thomas Struth connected with the promotion of the publication of Krzysztof Pijarski (Post)Contemporary Histories of Paintings, which consists of two essays: The Place of Paintings. On Thomas Struth’s Museum Photography/ Photography Between an Archive and a Tale. Allan Sekula’s Materialism.

(Post)Contemporary Histories of Paintings has been an idea to comprise two extensive essays concerning two totally different artistic personalities in one book: one is about a German photographer Thomas Struth, numbered among the most outstanding representatives of the so called «Düsseldorf school» which has discovered the easel painting size and manner of representation for photography; the second one depicts an American – Allan Sekula, known for his critical attitude towards the presence of photography among the fine arts, who in his artistic practice derives on one hand from the tradition of conceptualism and criticism of institutions, on the other however, from successes (and failures) of classic avant-garde. They both belong to the top contemporary artists using the medium of photography.

Publication awarded by the Association of Art Historians (2013) and awarded for graphic design of scientific publication on XX Scientific Book Fair (2014)/Wroclaw.

Krzysztof Pijarski  – born 1980. Art historian, artist working mainly with photography, translator. Lecturer at the Filmschool in Łódź. Member of the editorial team of “View. Theories and Practices of  Visual Culture”. Recipient of a Fulbright Junior Research Grant at Hohns Hopkins University (2009-2010), and grants from the Polish Minister of Culture and National Heritage and the Shpilman Institute of Photography. His main fields of interest are contemporary art, theory and history of photography and the affective and political power of images. As an artist, he is interested in the (post)modern fate of images and objects – in museums, archives and other „machines of representation.” In 2010 a selection of the writings of Allan Sekula in his translation was published by Warsw University Press. He publishes in “Camera Austria”, “Teksty Drugie”, “Kultura Współczesna”, “Obieg”. Editor of The Archive as Project (2011).