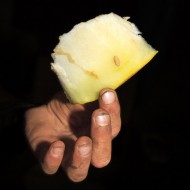 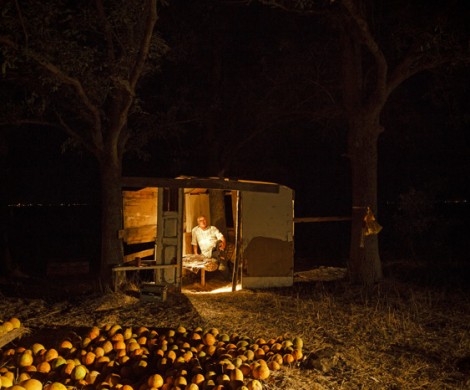 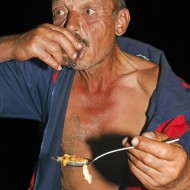 Golovchenko in photographs of the 21st century roadsides of his native country Ukraine depicts a wide range of people living on the ‘tochka’, offering fruit according to season and also far more. ‘Tochka’ is a general term for sales point, sometimes also referring to prostitution. The merchants live close to their makeshift emporiums in tents and trailers, some build shacks for the summer months. Many come from Azerbaijan, Georgia, Armenia and mix with the locals along the strung-out markets. They dwell and sell alone or bring their families, kids growing up on the street. A microcosm has formed of very different people having one thing in common: they want to make money to simply get along or save up and improve their living conditions in their respective homelands where most return for the winter months, not making any money there at all. (Horst Kloever & Kirill Golovchenko)

Kirill Golovchenko (1974, Ukraine) studied photography and communication design by Darmstadt Universityof Applied Sciences in Germany. He got several awards, including the European Photo Exhibition Award, Abisag Tuellmann Prize and the Berthold-Roland-Photo-Art Award. Further his photographic projects have been implemented in the Ukraine and in Eastern Europe supported by the the DAAD scholarship and the project funding VG Bild-Kunst. His photographs can be seen since 2003 in solo and group exhibitions including: Museum Folkwang, Essen, Art Society Ludwigshafen, PhotoEspaña Madrid, Photo Museum Braunschweig. www.kirillgolovchenko.com