Another Dose of Creativity!

The process of selecting participants of the 8th PechaKucha Night Łódź, which will be held on 18 May 2012 at 8:20 p.m. at the café club Spaleni Słońcem in the Off Piotrkowska zone (138/140 Piotrkowska Street), was launched. The event was distinguished in the contest “Point for Łódź 2011” in the category “Creative Madness”.

All persons willing to taking part in the event are requested to submit applications by 4 May to: pechakucha.ldz@gmail.com.

Please provide the following details:
- first name and surname, age
- a brief note on what you do, where you work
- contact details – phone number, e-mail, website
- brief outline of the planned presentation + 3 exemplary JPGs

Those who qualify will be obliged to send the final version of their presentations by 13 May 2012.

PechaKucha is a form of presentation invented by architects Astrid Klein and Mark Dytham of Klein Dytham Architecture. The first PechaKucha took place in TOKIO in 2003. Currently, it is held in more than 500 cities around the globe.

The name “PechaKucha” is derived from the Japanese word which means “chat”, and its correct pronunciation is “pechakcha”. PechaKucha is an open and non-commercial event. Anyone who has something interesting to show or say can take part in PechaKucha – age, professional and material status aren’t important at all – it’s invention that counts! PechaKucha is an occasion to meet creative people, present interesting projects to a wider audience and freely exchange opinions.

Participants present their ideas according to the simple 20x 20 scheme: 20 seconds for each of the 20 slides, which adds up to 6 minutes and 40 seconds for the whole presentation. Presentations can focus on, e.g. a creative space that’s just developed, a building, furniture design, advertising campaign, clothing collection, graphic design, new event, social initiative, or simply an idea you think the whole world should know about. What PechaKucha needs to be completed with is a lot of conversations, music, beverages and fun.

Since October 2010, seven “Pechakchas” were organised in Łódź – each was held at a different location and had a slightly different atmosphere. “PechKachas” took place, among others, during the Lodz Design Festival in 2010 and 2011, at the Summer Priest’s Mill and the Regional Culture Congress. 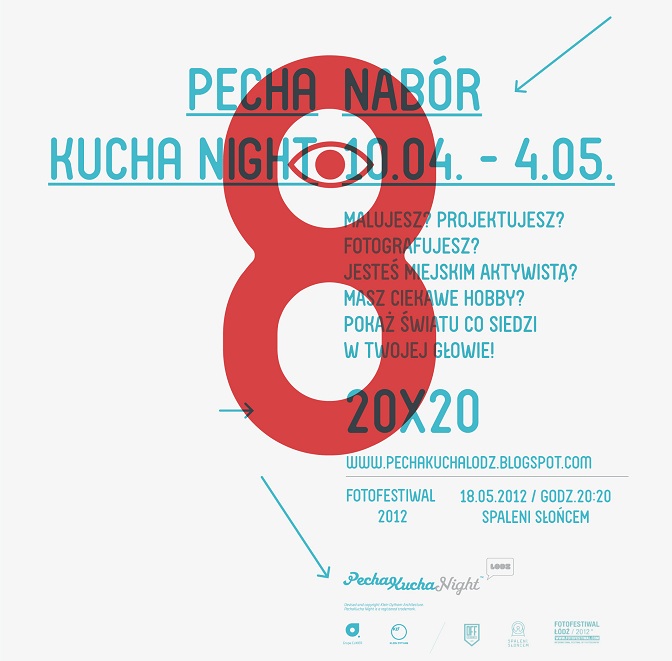