Since 2000 Lucia Nimcova was researching different approaches to reality in Eastern Europe. She wanted to show how the past influences the present. The history of Eastern Europe is changing depending on political structures. In her view, communism has never finished; it has just transformed into something else. “Normalization” was an ideological programme of social and political integration in Czechoslovakia after 1968. During the normalization period, people were taught to be passive. She couldn’t stay without an opinion. She wanted to visualize this process of transformation. In order to do that, she combined archival photographs and films she found with contemporary images and videos.

I spent two years doing in-depth research into the history of my birthplace, the town of Humenné in eastern Slovakia, combining the official picture archives with pictures made by amateur photographers and my own images, commenting on normalization and its contemporary consequences.

While working on the “UNOFFICIAL” project, I have realized that most of the people I have portrayed were “dead while alive”. In the video “Exercise” (2007), by asking them to exercise for me I wanted them to “wake up” – to be alive again.

In “Double Coding” (2010, video installation) I have analysed banned Slovak films. I worked with 40 films made between 1968 and 1989. There was almost no logic as to why they were banned. All the rules were very subjective, usually depending on committees during the whole filmmaking process. My idea was to subjectively select and create a piece, a small visual labyrinth open to imagination and interpretation.

In the “Moments” series I document “ready-mades” of the world we are living in – evidence of a certain human way of thinking in the system, or just evidence of certain human decisions. I am a collector who is using photography to document them. They are almost invisible, but still present. 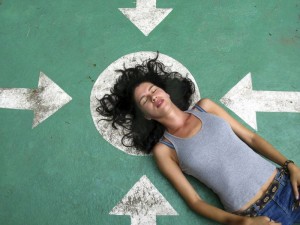