“Yann Gross is passionate about skateboarding and always takes his deck on his journeys. During one of his trips to Eastern Africa, he encounters a group of skaters, known for having built the first and only half-pipe in Uganda. Located in Kitintale, in the popular suburbs of Kampala, Gross is immediately seduced by this vernacular infrastructure and the integrative function it plays among the local youth. Given the area’s contingencies, including, in particular, the lack of material, skateboarding becomes a collective sport that produces a whole new range of styles and unprecedented tricks. Having shared its daily life for several months, Gross finally becomes a full-fledged member of the group, to the point he even co-organises the first skateboarding contest in the African Great Lakes region. In parallel to these anecdotes, his insider’s view makes him a privileged analyst of the ways this sport strengthens ties and fosters dreams among this micro-community. »Kitintale« goes thus beyond mere documentary narratives, trendy clichés or paternalistic discourses and offers both a humane and symmetrical account of contemporary changes in Africa.” 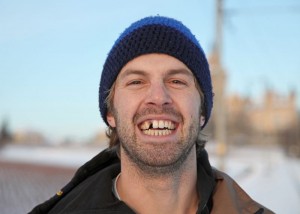 Graduated from ECAL (Ecole Cantonale d’Art de Lausanne) in 2007. His works mostly focuses on identities issues and visual story-telling. In 2008, Yann was awarded with the „Photo Espana Descubrimientos” Prize and nominated as one of the 13 emerging artists of the year by the American Photo magazine. Among his most recent solo shows feature “Horizonville” (Winterthur, Madrid, Vilnius, in 2009 and Arles in 2011) “Lavina”(Budapest, in 2008) and Kitintale (Biel, Breda in 2010 and Paris 2011). He’s the 2010 winner of the International Fashion&Photography Festival of Hyères (France) and the same year, received one of the Swiss Federal Art Grant. Yann Gross is a member of the artists network Piece of Cake. Two recently published projects explore subcultures informed or influenced by fantasies of American culture. Horizonville focuses on the often incongruous Western-themed delights of the Rhone valley in Switzerland, while Kitintale builds a picture of the community that gathers around east Africa’s only skate park in a workingclass suburb of Kampala.