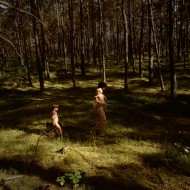 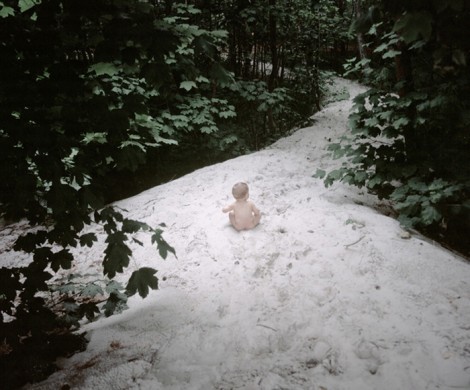 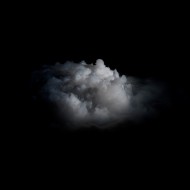 At the Garden’s Edge

Family Triptych/At the Garden’s Edge is a one-of-a-kind work, its constituent parts revealing only now, when arranged next to each other, the laborious process of change that has been taking place in Igor Omulecki’s life and work over the last five years. With the pregnancy of his wife, Daria, comes a discovery which at first the artist is unable to say much about; he tries rendering it visually instead. In the opening series, Lucy (2007-2009), the wife’s changing body is in the foreground, but it is in the background that true revelations occur. The couple stand at the entry to a new space that is opened up by the child they are expecting. This does not mean that the Triptych becomes, with the very first image, a parenthood narrative or a paean to a new life. Rather, the images should be treated as an impulse for the change at hand, the beginning of new vision. Hinting at where the artist looks is the dominant green colour, the nature surrounding Daria, as did Venus before. In the whole Triptych, fauna and flora are given space in the images as a rule. Thus Lucy gives rise to a process of confronting and relating to a rediscovered world of nature. We are reminded of this by one of the photographs, with traces of chemical processes corroding the image, which imitates organic tissue. Not out of perversity, though – that is missing from the Triptych – but in an attempt to overcome the contemporary distinction between the manufactured and the natural.

The arrival at the garden’s edge is underscored by the title of the first series. Lucy is a special name in the history (and ‘herstory’) of mankind: the name given to a 3.2-million-year-old hominid skeleton discovered in Ethiopia in 1974, known as the ‘mother of man’. A reference to an ancestor so distant defines the time of this new space. It is not rationalistically divided into the past, present and future, but into remaining, lasting and passing down. As the folk wisdom goes: nothing gets lost in nature. Lucy remains present in our instincts, dreams and anxieties. Omulecki explores also such areas: our fears are hidden in thickets, flashes and masks.[…] (Jakub Śwircz)

Read curator statement of the exhibition.

Igor Omulecki was born in Lodz, Poland in 1973. He studied Polish National Film School in Lodz, and has been working as an artist and freelance photographer. Omulecki has been awarded numerous grants and awards, including Prize of the Ministry of Culture of the Republic of Poland , National Diploma Cannes Lions, IPA Award, ExhibitA Award. His work has been exhibited internationally, including at Cornerhouse  (Manchaster), Barbican  (London),  The Glass House Gallery (London), CBKG  (Arhnem), The Centre for Contemoprary Art  ( Tel Aviv), Tri Postal  (Lille), Matadero (Madrid), Museum Of Modern Art ( Warsaw), Central European House of Photography  (Bratyslava). For more information, please visit: www.omulecki.com