The “Plastic Spoon” project has evolved from 4 years of interacting and building relationships with the residents of Muirhouse, one of the most deprived council schemes in the UK. The scheme, which is located on the outskirts of a city that – conversely – has the most millionaires per capita in the country, is known for its high unemployment rates and issues with drugs and violence.

The title “Plastic Spoon” has multiple layers of meaning. When I ate with my friends from Muirhouse, we would be eating take out which came with plastic cutlery. Another connotation associated with a plastic spoon is the heroin culture that is deep rooted in this community, since spoon is the utensil most commonly used to prepare heroin. And lastly, to me a plastic spoon represents the working class. There is a saying: “born with a silver spoon in your mouth”, which means you are born into a rich family. The way I see it, a plastic spoon is the opposite of the silver spoon.

This project intertwines through an array of individuals, landscapes, objects, and domestic settings that communicate the feeling of isolation, alienation, and the eccentricity that is specific to Muirhouse. 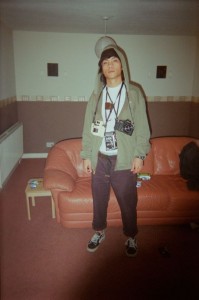 Graduate of the University of Edinburgh in Scotland. His main interest lies in human behaviour and the influence of surroundings, including the presence of the photographer, on persons depicted in photographs. Yoshi Kametani believes that a person’s privacy is revealed at the time of registering an image or a sound, even if this takes place in a public place. That is why Yoshi Kametani works alone. He finds assuming responsibility for what he photographs very significant – he gathers information about the environment he stays in himself, concentrates on his own reality and dismisses universal truths.

Kametani’s works are a completely subjective reflection of experiences connected with the persons he shows in his photographs, that is why his art cannot be classed as documentary photography. The author himself, so as to avoid authoritarian connotations, displays them in galleries. This gives the recipient an opportunity to diverge from the concept of a documentary which consists in presenting an objective reflection of reality.