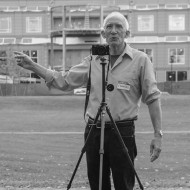 Francois Deschamps (b. 1946, New York City ) is a professor at the State University of New York in New Paltz, NY, where he teaches photography and related media. As a photographer and book artist, he has produced over 10 artists’ books. He has received two fellowships from the National Endowment for the Arts, as well as three artists’ fellowships from the New York Foundation for the Arts. In 2002, he was awarded a residency at the Cité Internationale Des Arts in Paris, and in 2010-11 he was awarded a Senior Research Fulbright grant to Mali. In 2013 he had a one person exhibit Photo-Rapide: Francois Deschamps at the Dorsky Museum in New Paltz, New York and in 2014 he exhibited Taxi Bamako at OK Harris Gallery in New York City.

I teach in an art school setting where I deal with all kinds of photographic work. I am interested in just about anything – from documentary to highly manipulated work.